You are here: Home > The Sundance Story: The greatest (also the smallest) discovery of the science era

The Sundance Story: The greatest (also the smallest) discovery of the science era

Strange all this Difference should be
’Twixt Tweedle-dum and Tweedle-dee!

Twist and shout …
Come on and work it on out

He starts with a simple entity—a tiny twist. With the quirky humor that often comes with new physics he calls this entity a tweedle. 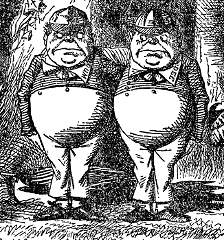 More precisely, a tweedle is a half twist: ± π or 180°. It is a dum or a dee depending on the twist direction, clockwise or anticlockwise. That makes each the 3D mirror image of the other.

Building with these simplest of elements he shows how all the matter and energy in the universe may be made with twists.

The Standard Model of physics gives us a messy explanation for matter and energy. It says they are made of sixteen different subatomic particles (like electrons, neutrinos, quarks and photons). Without good reason they are said to be elementary as distinct from composite. 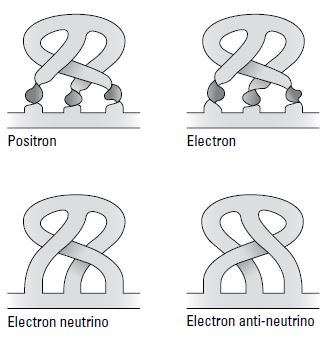 Quantum theory conceives these particles existing in a space that is continuous. But some current physics theories depict space as granular at Planck scale. Bilson-Thompson saw how at Planck scale all sixteen critters in the Standard Model zoo could be made out of a single entity: the tweedle (his half twist in a ‘ribbon’—as he calls it; more on this below—between granules of space).

His recipe for matter-energy is so simple it’s like child’s play.

Now pick three preons, hold one end and make a simple braid and you get one of those subatomic particles—now seen to be not elementary but composite. Each subatomic particle is made of six tweedles. At the atomic level it takes twenty-four tweedles to make a hydrogen atom.

Tweedles also match the zoo inhabitants’ often strange behavior: The braids of any two tweedle-based particles commingle to yield precisely the result we see with their colliding counterparts. 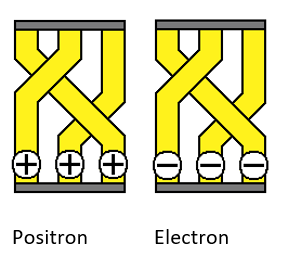 A tweedle’s half twist corresponds to one sixth of the ostensibly elementary negative charge e on the electron. By convention, the dum is positive; the dee is negative. Bilson-Thompson’s electron has six negative dees—six charges of e/6 or, viewed from a slightly greater distance, three charges of e/3.

With our tweedle microscope we can see inside the positive proton to unscramble what’s going on with its three quarks and where its charge comes from. The proton is two up quarks with four dums each and one down quark with two dees. So it has eight positive and two negative for a net six positive charges of e/6.

There’s more: Tweedle-based quarks share the so-called colour distinctions that form the basis for quantum chromodynamics. These distinctions make possible the matter that makes us.

Tweedle physics bears a much-anticipated message: The world is relational. That is, at Planck scale seeming-solid matter is made of nothing more substantial than space and its twist relationships.

It also shows us how matter transforms into energy as announced (but not explained) by the world’s best-known equation E = mc2. At Planck scale, matter and energy are just various three-braided arrangements of those tweedles or, in case of the photon, a three-braid of ribbons that are not twisted.

Tweedle physics calls for tweedle math. What would that look like?

It’s not an easy question. But there is an answer and it has Sundance connections.

Greek physicist Fotini Markopoulou-Kalamara was Bilson-Thompson’s mentor at Perimeter Institute—PI, the physics-theory hothouse in Waterloo, Canada—and sometime co-author with him. In 1998 she wrote a paper aptly subtitled “What the universe looks like from the inside.” It extolled the virtues of an esoteric math method called partially ordered causal sets.

There is now reason to think the universe is a partially ordered causal set. That makes Markopoulou’s paper on its math a much neglected very hot tip. (One of the world’s most original physicists—PI fired her for being too original—she quit physics and went into business. See what I mean about the inertia of physics?)

Such math conceives of space, Markopoulou says, as ‘a very large set of causal relations’. Or, in the terms used in Time One, as a very large set of Planck-sized quanta of space, each linked by quantum ribbons to its neighbours, and each causally related to its predecessors in the preceding set.

Well, actually, Time One uses simpler language (you’d need to read the book) and the universe begins with a set of just two quanta that were caused by only one. That is, to use Sundance’s terminology, the universe began with the creation of Tweedledum and Tweedledee—a construct of which he had no conception.

Bilson-Thompson also worked with American physicist Lee Smolin at the Perimeter Institute and was a co-author with him. Smolin, a string theorist who turned to quantum gravity, long saw the need for purely relational (aka background-independent) physics at Planck scale. Relational physics does not start with space and particles in it; rather they emerge from relationships. But it is hard to even think about things that make Planck-scale space with things in it—as distinct from studying Planck-scale things (like strings) in space—let alone come up with the mathematics.

This is where we get to the ribbons Sundance twists. Without clearly identifying them he sees them as Planck-scale elements of the fabric of space. (I see them as that and as more than that.)

To date the focus of Bilson-Thompson’s work has been explaining the complex picture of the Standard Model “elementary” particles in terms of a single, simple and maybe truly elementary entity.

The history of the “uncuttable” atom—since even before Albert Einstein showed its reality—has been one of repeatedly being cut, or smashed, into smaller subcomponents. How do we know the tweedle will not (as one of his co-authors once suggested) turn out to be composite too?

Well there is no way to know this. Tweedles are far smaller than the smallest scale we can experience. But there are good reasons for us to think the tweedle takes us to the final atom.

As Sundance says, ‘The principal significance of this model is its extreme economy.’ Occam’s Razor, in other words. One might say that never has so much been accomplished by assuming so little.

As well, when one contemplates his tweedle—a simple half twist in a 2D ribbon—it is hard to conceive how it might be dissected into subcomponents.

And his ribbon is a Planck-scale entity (in Time One the quanta of space are Planck volumes) than which by definition smaller has no physical meaning.

Then there is the fact that science’s long search for underlying simplicity—from the myriad different substances we see around us, to the 92 kinds of atoms in the Periodic Table, to the subatomic structure of nucleus-and-electrons and the 16 subnuclear particles of the Standard Model—with tweedles has arrived at all being made from only one. It is the holy grail of the monadic philosophic view. There is nowhere to go that’s simpler than one.

There are its underlying symmetries: Much of the Standard Model story and other recent physics has been built on symmetries without it being clear just why they are so fundamental. The tweedle is the epitome of symmetrical simplicity—a rotation and its mirror image.

And finally, tweedles enable us to solve deep problems that long seemed intractable. Other Science Seen articles have set out many deeply puzzling problems tweedles explain. Indeed, it is not clear that we’ll have any such problems left after we exhaust its explanatory power.

For example, standard cosmology, based on general relativity, says all the vast mass of the universe was concentrated in a single point when it all began almost fourteen billion years ago. Problem is, nobody believes that and nobody (until tweedles showed how space and matter could come into existence as a single causal enterprise) had a viable alternative.

Not least of its achievements is leading to simple answers to deep puzzles like: Why are there three dimensions? And that deepest of all puzzles: How did the universe begin?

As if this is not enough, I say his tweedles show how particles and space can emerge together from the same set of causal relations. That is, tweedles are twists in links (or ribbons) between Planck quanta (or flecks) of space. Sundance doesn’t disagree; he just doesn’t go there—yet.

So where is all this headed? Ultimately the tweedle leads to much more than new math. It delves into what philosophy calls ontology; it probes the nature of reality. Since the days when Albert Einstein discovered quantum theory, physics has avoided questions about reality, calling them metaphysical (not intended as a compliment). But the biggest breakthroughs involve profound ontological issues; they bring us closer to an understanding of the real world and open up new realms of physics.

These days physics is big business. Physicists are deeply invested in their costly and specialized educations. Big breakthroughs run into so much inertia they may take decades making it into the mainstream.

Elsewhere, a leading economist shows why we could all be much better off if we can get this breakthrough moving sooner.