You are here: Home > At last there is a solution to the elementary-charge problem and it turns out to be stunningly simple.

At last there is a solution to the elementary-charge problem and it turns out to be stunningly simple.

It has long been a deep and frustrating puzzle. The charge on the electron, symbol e, is said to be an elementary quantum. That is, neither the electron nor its charge is ever seen to be subdivided. Lots of measurements reveal the charge on every electron has exactly the same value. For more than a hundred years physics offered no way to explain why it would be so. Now there are new and truly fundamental answers.

The electron’s story begins in 1881 when Irish physicist George Stoney says its charge is the fundamental quantity of electricity. He estimates its size. It is soon measured more accurately. Today its measured value is 1.602176620898×10−19 coulomb. Understanding what this means gets messy. A coulomb is the amount of charge transferred when one ampere flows for one second. One ampere is the current that—flowing through two infinite, thin, parallel wires one meter apart—produces a force of 2×10-7 newton between them per meter of their length. One newton is a force that accelerates one kilogram by one meter per second squared. So we see that physics defines the charge on the electron in terms of the size and mass and motion of much larger objects. This seems far from fundamental and leaves us looking for an explanation. 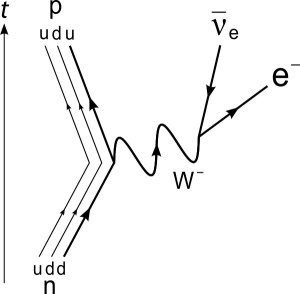 Meanwhile the puzzle gets even deeper. The electron’s charge is equal and opposite to the charge on a proton. One can rationalize this since a neutral neutron can decay into a proton and an electron. The proton too was thought to be a fundamental particle until physicists smashed it into quarks some fifty years ago.

The proton turns out to be made of three quarks: one down quark and two up quarks. Down quarks have a charge of e/3. Up quarks have a charge of ‒ 2e/3.  Thus the proton’s charge is e/3 ‒ 4e/3 = ‒ e. This charge is positive since, by convention, the electron is taken to be negative. So now we are left trying to explain how the electron’s charge is fundamental and indivisible and yet the proton’s opposite charge is composite and divisible but equal. It’s a perfect recipe for mental indigestion.

Also, why thirds? Can quark charges be further subdivided? How do quarks exactly match their fractional charges to thirds of the electron’s? What’s going on here? Yet another simple physics story seems to have descended into a mess of awkward questions. But don’t give up. Now we’re getting to the answers. 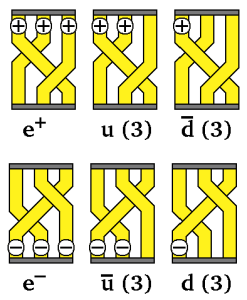 In 2008 Australian physicist Sundance Bilson-Thompson proposed that electrons and quarks are made out of entities he calls helons. Each helon is in turn made of two tweedles. Tweedles have charges of plus or minus e/6. He identifies these charges as left-handed and right-handed half-twists in “ribbons”. As they combine in pairs their charges cancel to leave zero if they are opposite or add if they have the same sign. So helons have charges of 0, ‒ e/3 or + e/3. He shows them in braid diagrams as simply blank, ‒ or +, as he reveals what we call e/3 or a full twist to be the true elementary quantum of charge. He braids three helons to make an electron; other three-braids make up and down quarks. The reasons for their charges are plain to see.

This braid picture would be a mere curiosity but it turns out that the same simple three-braids make all the other fundamental particles known to the Standard Model of physics. It is a one-to-one correspondence, meaning all of the possible three-braids match all of the known particles. They all have the right charges. When combined the natural behavior of braids yields all the known particle interactions. For example this shows neatly how a neutron decays into a proton and (via a W+ boson) an electron plus an antineutrino, all as is in fact observed. The helon model explains in detail what is going on inside that neutron as an up quark turns into a down. Similarly it explains all other observed particle interactions.

Simply put: As the Standard Model shows, all matter and all energy is made of particles. As the helon model shows, all particles are made of pairs of tweedles; they have charges of ± e/6 or, if we can get that old e out of our heads, of plus or minus one. Now we see everything is in its place and there is a place for everything.

No wonder Bilson-Thompson says ‘The significance of this model is its extreme economy….’ It has huge explanatory power.

So what are those “ribbons”; and why would helons combine in threes? Bilson-Thompson doesn’t say. But Time One does.