You are here: Home > At last an answer: What happened at the Big Bang

At last an answer: What happened at the Big Bang

What exactly happened when the universe was born?

What happened at the Big Bang? is the title of last summer’s popular science exhibition sponsored by six leading British universities and the Royal Society in London. Amid much fascinating information, the exhibition’s answer was: We don’t know.

Yet, as Science Seen’s readers will recall, that answer is no longer true. Today’s universe is the result of that first instant. It provides many pointers about how it began. Those pointers all converge on a simple explanation.

That there was a first instant was once controversial. In 1927 Bertrand Russell said, ‘The idea that things must have a beginning is really due to the poverty of our imagination.’ But that same year Georges Lemaître—father of the Big Bang—solved Einstein’s equations for general relativity. His solution showed the universe must be expanding. Looking far back in time, Lemaître said the universe must therefore have begun as a single quantum at a definite instant. 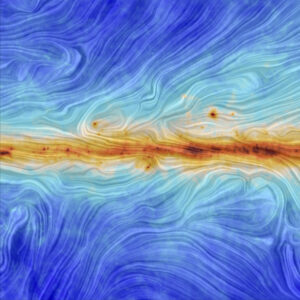 It is now clear he was right; his predicted expansion would soon be discovered. The instant the universe was born is now measured (most recently by the Planck satellite) to be some 13,799,000,000 years ago.

So, what kind of single quantum could lead to everything we see today?

The answer becomes obvious when you think things through with repeated applications of Occam’s Razor: Choose the simplest assumption.

First (literally), the one quantum must turn into two quanta because otherwise there would still be only one. And if one can turn into two, what is simpler than to have the two turn into four?

Let’s step back from this for a moment to observe that these doublings are not happening in space and time. That first single quantum was space; it was the whole universe!

It follows that it had a volume, because otherwise space could not have the vast volume we observe it has today.

What volume did it have? It must have been very small because the simplest assumption is its copies were identical and we do not see distinct quanta of space today. But we do have insights from a variety of pointers that suggest space is made of tiny quanta.

An early pointer came from Bernhard Riemann—father of the geometry of space—in 1854 when he said such a granular space would simplify geometry because it would need no arbitrary metric to allow measurement. Instead of a ruler one could simply count the granules. A more recent pointer comes from string theories that suggest there is a smallest piece of space.

These pointers hook up with the work of Max Planck—father of quantum theory—who, in 1901, used observed properties of radiation to calculate the basic volume (now known as the Planck volume).

So far Occam’s Razor gives us this picture of the universe’s birth: It began with a single quantum that had the Planck volume. It was unstable; from time to time it (and each of its progeny) turned into two identical quanta of space.

But wait? “from time to time”? There was no time! Time (or, rather, the possibility of motion and clocks) emerged once there was space and something (matter and energy) to move in space. Absent time, there was simply succession: first step, one became two; second step, two became four; etcetera.

This is a far simpler assumption than what we see in current speculations about the early universe, including the current front runner, cosmological inflation, which has been shown to not work—and which has so many ugly assumptions I liken it to a Rube Goldberg device.

The apparent problem with this simplest of assumptions—no change—is that at its first steps the universe contains no matter and no energy, only space, so surely something must change.

Not so. But we do need to add one more assumption about the nature of the initial quantum. Let’s go with the already-introduced string theories that say not only it should have the Planck volume, but also it should have six internal dimensions (indeed, it should be a much-studied mathematical structure known as a Calabi-Yau manifold).

If it were so, what would happen to such a structure when it replicates? This is not easy to do in your head. The two quanta (or manifolds) are linked by a loop of 2D “ribbon” made from two of the six internal dimensions. There simply is no other way for it to happen. After the third replication each quantum is threaded on three ribbon loops.

Successive replications (tocks of the cosmic clock called foliations) give rise to a tangle of manifolds and twisted ribbons.

This is how, with no change, the universe can give rise to matter and energy, having begun with none. In 2005 Australian physicist Sundance Bilson-Thompson showed how simple twists and threefold braids can give rise to all the basic particles of the Standard Model of physics and explain many of their properties, like electrical charge, and their interactions. The significance of this discovery (he says with Aussie understatement) is its ‘extreme economy’. Occam’s Razor once again.

Indeed, this simple beginning allows us to not only describe the fundamental structure of matter and energy in terms of one single component—a simple half-twist—but also to explain dozens of previously inexplicable problems and paradoxes.

How many successive doublings of this tiny Planck-sized quantum of space would be required in order to create the vast amounts of space, matter and energy that we observe? Six hundred doublings would suffice, all occurring in no more than the first 10-42 s of the universe’s life.

Those three assumptions about the first quantum are readily justified: they seem to be the simplest possible and yet they also seem to lead to many explanations.

Naturally there will (indeed should) be skeptics, to whom I say: What assumptions do you need to explain the universe’s mysteries? Meanwhile it seems justified to chide the Royal Society: We may now know exactly what happened at the Big Bang!