You are here: Home > Ant-Man and the Sundance Kid

Ant-Man and the Sundance Kid

Ant-Man is back this week in a new sci-fi movie. Rumor says your favorite shrinking superhero’s set to shrink even smaller than before. 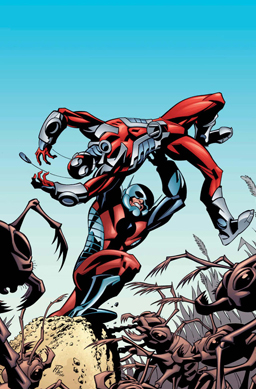 This could set a trend. Will we soon see Ant-Man in action all the way down to Planck-scale?

The sixties comics and the 2015 movie Ant-Man were about scale and a suit that gives Scott Lang a way to change scale up and down from big to very small.

In the new release, Ant-Man and The Wasp, Lang takes very small a big step smaller. Reviewers say it’s fun: It is “beat-for-beat the most legitimate action comedy in the Marvel Cinematic Universe, and the movie with the biggest laughs”, says Matt Patches.

Ant-Man fun is also brain-training for thinking about things that seem unthinkable. Reportedly he now takes us down to quantum scale. The quantum-scale world exists at the size of atoms and their subatomic pieces. It is real; but its reality is weird.

It’s a now-you-see-it-now-you-don’t (and did-you-really) kind of place to be. For example, a simple experiment—replicated many times—shows a single particle such as an electron in two different places at the same time. It bends physicists’ minds. Quantum craziness is sure to jazz up the new movie.

There’s serious science behind the science fiction. This is the realm of atom smashers like the Large Hadron Collider. In a huge tunnel straddling the France-Switzerland border, the LHC’s the world’s biggest and most expensive machine.

Ant-Man and The Wasp could be set for box-office success. We know what that will mean: Ant-Man will be back again. 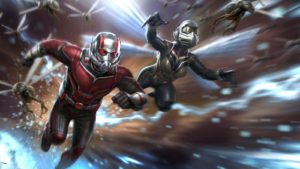 Next time will his shrinking still be limited to quantum scale? By then, the quantum world could be a bit old hat.

Ant-Man has nowhere to go but down. I imagine Marvel’s universal-elevator voice: ‘Going down. Next floor, Planck scale.’

Planck scale isn’t just the next floor down from subatomic. It is the last floor. Cutting-edge physics says there is nowhere smaller for reality to go. Sizes smaller than the Planck length have no physical meaning.

The Planck length is about a trillion-trillion-trillionth of an inch. It is to an atom like the period at the end of this sentence is to the entire universe. Imagine what Ant-Man can do with that.

It’s hard to imagine. Planck scale is so far beyond anyone’s experience the wildest imagination fails to grasp it. As evidence, my search finds only one sci-fi story in a Planck-scale setting. (Can anyone find more?)

Yet my money’s on Marvel to write Ant-Man into a Planck-scale adventure. Maybe they have already started.

While it may seem a shame to take the fun seriously, Scott’s antics do have a serious side: They could involve a boost to the economy on a scale Marvel Studios cannot imagine.

The good news for Scott Lang is Planck scale is where the real action is. The bad news is there’s really not a lot of action.

Will this cramp his style? Hell, no! He gets by just fine on thin slices of science and great gobs of fiction.