You are here: Home > No, the universe is not driven by energy. Sir Roger Penrose almost gets it.

No, the universe is not driven by energy. Sir Roger Penrose almost gets it.

Physicists have a mental image of the way the universe works. Most think of it as driven by energy. Even leading British physicist Sir Roger Penrose falls for this. He should know better.

The conventional wisdom begins with all mass of the universe exploding out in the Big Bang. No-one knows why it would do this. It is (the standard story goes) still expanding under its outward momentum. In other words it is expanding today because it was expanding yesterday.

For at least a decade Penrose has wracked his brain over a deep contradiction in the standard story. He frets that it seems fundamental yet other physicists pay it no mind.

In his recent book, Fashion, Faith, and Fantasy in the New Physics of the Universe, he speaks reverently of ‘the gigantic, all-encompassing explosion known as the Big Bang’. In the next sentence he goes on to question how ‘such an unimaginably violent explosion could represent an exceptionally low-entropy incredibly macroscopically organized state’. 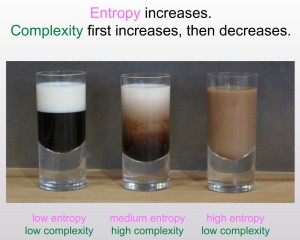 A brief digression for readers who don’t often think in terms of entropy: Entropy is disorder. Penrose is saying (with more messy adjectives than is his wont) the infant universe must have been highly ordered. The Second Law of thermodynamics leads him to this conclusion.

It is indeed a huge inconsistency. He calls it ‘the most profound mystery of cosmology’. And he says, ‘… for some reason, it is still a largely unappreciated mystery.’ This is Brit stiff-upper-lip code for: I can’t believe that these dumb physicists don’t get it!

Part of the reason may be that he doesn’t get it either. Very close; but no cigar Sir Roger.

He would be way ahead with an adjustment to his mental image. There was no unimaginably violent explosion. The Big Bang (or “Big Fizz” as I’d rather call it) was a smooth expansion. Sure, there was a lot of hot plasma early on but it was incidental to the story of expanding space. That story was—and still is—all about entropy. 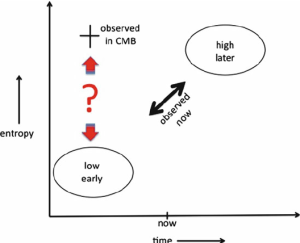 It’s odd how few physicists can bring themselves to think about the instant of the universe beginning. (I’ve suggested it’s a phobia about religion.) In an odd way Penrose is a rare exception: he works a wacky notion that the universe goes through an endless cycle of Bangs and Crunches separated by Big Bounces. The virtue of this notion seems to be that it avoids embarrassing issues about how it all begins (though it seems to me to only make these issues messier).

Elsewhere in his book Penrose writes about how all we see may be made of tiny Planck-scale quanta. Pursued to its inevitable conclusion at this scale the Second Law turns out to be a super-clue. To solve his most profound mystery, all Sir Roger needs to think of is the entropy of the universe when it was a single quantum. (He does much tougher math than this in his head.) The answer is zero. The beginning of the universe is not just ‘highly ordered’. It is a state of perfect order.

It’s only when that unstable first quantum turns into two (it must have or we wouldn’t be here) that things start to get messy. Australian physicist Sundance Bilson-Thompson explains in beautiful detail how the quantum tangles in space turn out to be matter, which comes into existence after the beginning. So you see, Sir Roger, solving your big mystery can lead to solving lots of other fundamental problems.

This leaves us with a simpler picture of the way the universe works. Just as the Second Law says, the entropy of the universe is always increasing. Disorder—not an explosion—drives the increase in space quanta we see as space expanding. It’s a picture that should be much to Penrose’s liking.