You are here: Home > The Beginning of Time

The Beginning of Time

When did time begin? Science now has an answer.

How did time begin? For millennia this was a subject for speculation, little of it based on science. But there is now a philosophic answer. Space came first. Time began soon after space. Very soon. Here’s how.

From recent measurements we know that time began 13,799,000,000 years ago, plus or minus about twenty million years. Twenty million years may seem like a lot of slack. In fact this result from the Planck satellite is amazingly precise, accurate to about 0.2%. That we have an answer as to when gives new impetus to that question: How? Can you close your eyes and picture what went on before the Big Bang got underway?

The fashionable answer in the last few years was: Cosmological inflation. It suffers from a bad assumption, namely that even at the smallest scale space is continuous. It is a non-explanation. It says that at time zero the universe began to expand from point size. (How all that came to be remains mysterious.) By 10-36s, while still very small, it started to expand far faster than the speed of light thanks to some fancy (but inexplicable) mathematics. [10-36s is a billionth of a billionth of a billionth of a billionth of a second.] By 10-32s, a 10,000-fold-longer time that is still exquisitely short, the whole mass of the universe was millions of light years in diameter and going strong. But then [again inexplicably] it stopped. Or rather—almost the same thing—it settled down to plain vanilla Big-Bang-type expansion. The main problem with this mechanism isn’t only that it sounds like a weird Rube Goldberg device. It’s that, as American cosmologist Paul Steinhardt (once a leading proponent of it) has shown, when one kicks its tires the wheels fall off.

A Planck-scale approach provides a simpler explanation. It says space comes in Planck-sized pieces and they tend to replicate (one turns into two) each Planck time. That is, every 5×10-44s. The number of such Planck-sized pieces (I call them flecks) of space in the very early universe is small. After 10-43s there are just four. At 2×10-43s, there are sixteen. But their number rapidly accelerates. By 10-42s, there are more than a million. But they are so very small that even a million-quadrillion of them would make a universe that’s far too small for our best microscopes to see. So how long did it take to make our universe, whose space is more than fifty billion light years across? 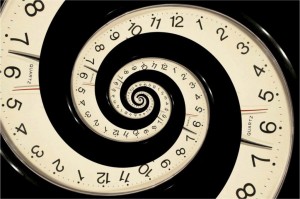 The answer is that six hundred Planck-times is more than enough. That’s 3×10-41s: a time that’s still so short it is beyond our comprehension. It has meaning only in imagination. We would call it instantaneous. So would a physicist equipped with the best futuristic stopwatch. Keep in mind: We measure time by motion. This time is far too short for anything to move by any distance that we can discern or even think about. In 3×10-41s—the time it takes for a whole universe to come into existence—a particle moving at the speed of light would travel less than one-quadrillionth of a quadrillionth of the diameter of a hydrogen atom! And, yes, that’s why space expanded far faster than the speed of light. [Note: Special relativity sets a speed limit on motion through space, not motion of space.]

For all intents and purposes we can say that nothing whatever moved in the new universe until the whole shebang had been set up. The very first motion in (not of) the universe—such as quarks moving toward potential partners at proton scale—could be said to have begun some 10-24s after the universe started coming into existence. Maybe we can conceive of this in terms of quark-sized clocks?

So time does not (as the narrator of Time One imagines) begin when the first fleck replicates. It began when space was well-installed so there could be motion. In other words time is not an inherent property of the universe, not one that existed from the very beginning; and it is not a fourth dimension. It is a statistic that emerges from the many flecks that make up 3-D space, and from the results of their renewal, which we see as motion.