You are here: Home > Albert Einstein showed that space has shape. Let’s take a look at this esoteric concept.

Albert Einstein showed that space has shape. Let’s take a look at this esoteric concept.

We now know that, far from being nothing, space is a something. Indeed space is a much more substantial something than the average density of all the matter that we see in the universe. We also know that space has shape as Albert Einstein showed.

But what is the shape of space? How are we to think of such a strange idea?

It’s a concept that can seem inaccessible—mostly discussed using abstruse math—but we can build a better picture of it by building on our new understanding of what happened at the Big Bang. That understanding tells us that space started as a single Planck-sized quantum or fleck of space that replicated very rapidly to make the vast expanse of space we see today (plus even more beyond our view).

First step in building our picture of space’s shape is to think about it at two scales: local and total. Right after the Big Bang, these two scales were the same. That is, the entire universe consisted of only a few miniscule flecks; so the total was also local.

Next step is to think about the first tock of the cosmic clock, when the first fleck became two flecks, tied together with a ribbon running through both to form a ring. The hard part is to think of them, not as in space, but as the entirety of space.

At this stage the entirety of space is incredibly tiny—only twice Planck-sized. Space in the Planck-scale infant universe is extremely curved! It already has a property it keeps to this day: though finite it has no edge. Go far enough in any direction and you wind up back where you began.

Space’s initial curvature is significant: One way to view the flecks’ propensity for replication is that it relieves extreme curvature. (After the first few hundred tocks of the cosmic clock—a fraction of a pico-pico-picosecond—space expands, becomes vast and reduces its curvature to almost zero. This offers us a simple reason for the replication slowing—as it must have done.) 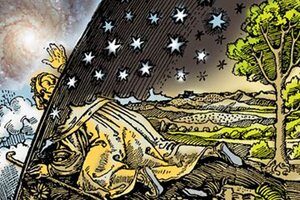 The expansion of space has no preferred direction so, at the total scale, space is spherical with a curvature that goes from extremely high to very low in an extremely small time. But we cannot—as engraver Camille Flammarion imagined in 1588—look from “outside” the universe to see its shape (there is no outside).

After a pico-pico-picosecond space was much like what we see today, except then it was filled with far more matter and antimatter. It already had gravity, which is (as Einstein taught us) nothing more nor less than the curvature of space.

In particular, what we call gravity is the local curvature of space. Local here means on the scale of large objects including planets, solar systems and galaxies. Gravity at this scale is well described for many purposes by Isaac Newton’s mechanics.

Unless, that is, the gravity is extreme. When matter collapses to extreme densities the local curvature of space or gravity can become so great nothing can escape. The result is a black hole.

Random fluctuations of density in the infant universe created primordial black holes that remain today; some say (as do I) they are the missing dark matter. They are spots with extreme curvature of space. Big black holes hold entire galaxies in thrall. 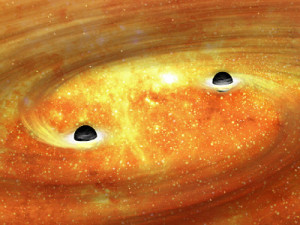 When big black holes collide they add another ingredient to the shape of space: gravity waves. Only recently detected, these waves in space are like those of sound in air but they travel at the speed of light. From peak to peak they are thousands of kilometers across.

Given what we know about the shape of space and what happened at the Big Bang, you may be asking why the infant universe did not collapse into a single huge black hole. The answer is: It did not have time.

Space became very large in a tiny fraction (about 10-42) of a second, expanding far faster than the speed of light. Under even the most extreme gravity matter can’t accelerate in space to speeds faster than the speed of light. In the tiny time it took the universe to become light years across, matter moved no more than a trillion-trillionth of the diameter of a hydrogen atom.

In consequence, high density matter creates only locally extreme curvature in space. You might say it lost the space race.