You are here: Home > Out of this world: Are the laws of physics different in other parts of the universe?

Out of this world: Are the laws of physics different in other parts of the universe?

Inflationary theories say the laws of physics should be different in other parts of the universe. Some have claimed to have observed evidence of variation. Now, in a high-precision study using a giant telescope (Arecibo; it’s the one James Bond and Natalya Simonova discover in GoldenEye), scientists observed no variation. 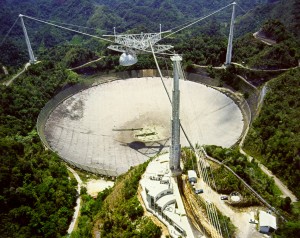 But the universe may be far larger than the hundred-billion-light-years space we see with the best telescopes. Some say space is infinite. Will there ever be a way to say the variation is true or false—or even that it’s likely or unlikely? I think so.

Inflationary theories build on mathematical assumptions to make the infant universe expand faster than the speed of light for an instant. The math says this keeps on happening forever, in places we can never see. This is called “eternal inflation”.

Eternal inflation theories say the universe comprises many distinct regions, each having its own version of the laws of physics. Even among serious physicists it has become so popular it is now said to be the ‘dominant paradigm in cosmology.’

These days inflation theories are thoroughly debunked. Yet some scientists continue to espouse the concept of varied laws of physics. 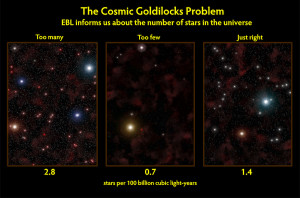 This idea is not just incidental. It is a major premise of continuing support for the discredited theory: Supporters claim it avoids awkward questions about why the physics we have turns out to be so well suited for our evolution and existence. This is known as the Goldilocks problem: If there were even a slight change in one of the many parameters of the Standard Model of physics, there would be no stars and we would not exist.

Variation in laws allows supporters to say we should be unsurprised to observe laws of physics that support our being. This “explanation” for our Goldilocks environment is called the anthropic principle.

This is not physics; it is philosophy driven by desperation—a need to explain how the universe’s space became so “flat” and why the laws of physics support our existence so precisely.

What if the desperation is not necessary? Then I see the philosophy collapsing under the weight of its assumptions and inconsistencies.

There is a simple alternative. The universe began as a single Planck-sized volume or fleck of space. It was (as string theories say) a Calabi-Yau manifold. It replicated, doubling the number of flecks (and so the universe’s volume) each Planck time. This expansion was far faster than light speed; it made space flat without the need for fine-tuned assumptions or fancy inflationary math.

Though a fleck is tiny, space expanded vastly in less than 10-42 seconds. Matter and the laws of physics emerged. Flecks stopped doubling every Planck time as the universe grew, so expansion settled down.

Foreshadowed by Georges Lemaître 85 years ago—this simple scenario explains all that inflation sets out (but fails) to explain. And it explains much more, such as space and time and where matter came from and even entanglement.

Lemaître’s ideas about the universe expanding in the Big Bang are widely accepted. Yet his idea about how it all began, published in leading journal Nature, was and is studiously ignored. Not because in today’s terms it is primitive but because it is viewed as religious—he was an ordained priest.

The simple scenario does not explain the Goldilocks problem. String theorists estimate there are some 10500 possible configurations for the Calabi-Yau manifold. The parameters of the Standard Model that make our universe so suitable depend upon the exact configuration of that first fleck—the “DNA of the universe”. So where did that come from?

I’m willing to leave that question to religion.