You are here: Home > Mind over math: We need to change the worldview of physicists.

Mind over math: We need to change the worldview of physicists.

It all began so easily. Physics uses math so it was natural for physicists to look for math that is convenient.

This led physics down a dead-end street.

Fixing it could lead to a huge opportunity.

The beginning goes back to the 1600s. Having revolutionized what would soon be called physics, Isaac Newton fell into a dispute with Gottfried Leibniz over who devised calculus, a math method that would become a key language for physics.

Calculus—as devised by both of them—assumes space and time are continuous and chops a line of any length into infinitesimally small pieces. In their competition for credit, neither paid much heed to whether or not a line can be subdivided infinitely many times.

By default, seeing space as continuous became standard for physicists. Their world is analog, not digital. It still is today.

Of course, at the scales we can see, it is always possible to subdivide a line. Split an inch and you get half an inch, then a quarter, an eighth, …. There seems no reason for this to come to an end.

Yet just such a limit has been hotly debated for 2,500 years. Today, leading opinion in philosophy and physics conceives of a small size that cannot be made smaller. It is the Planck length—calculated by Max Planck in 1899 to be 1.6×10-35 m. (He soon snapped up a Nobel Prize—for something else.)

This is not much of a limit for most purposes: It is a billion-billion-billion times smaller than an atom. But the fact of its existence (if it does exist) has profound consequences for progress in physics.

Physics got a second chance in 1854 when Bernhard Riemann studied how to do geometry in spaces of various dimensions. His work laid foundations for the 4D math Einstein used for general relativity sixty years later. He said there’s a choice to be made between two basic kinds of spaces: continuous space and space that’s granular or made of tiny pieces than which nothing can be smaller.

Riemann pointed us in the granular direction, noting that to do geometry in a continuous space one must invent a metric, a way to make measurements in that space; whereas in a granular space one needs no arbitrary metric since one can count the pieces. 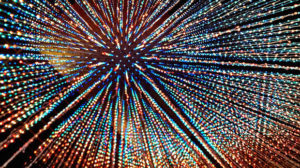 These days physics hovers on the brink of a third chance to work with real space. The inconvenient truth that space is granular is increasingly hard to avoid. It lies at the heart of efforts to reconcile physics’ two separately successful but mutually incompatible descriptions of the world: quantum theory and general relativity. 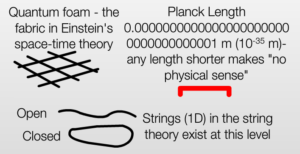 Yet these efforts mostly continue to work in continuous space! For example, while string theories conceive of particles in terms of Planck-length strings, the equations of string theory set these strings in a space that is continuous.

For those raised on continuity it is not easy to think of space as granular. To do this well we need a new vocabulary and new connections among our synapses.

Yet in school and university courses space is still explicitly treated as continuous. Granularity is rarely mentioned as a possibility.

A generation raised to think in terms of space that’s discontinuous would offer physics a third opportunity to explore the world in terms of the way it really is—the long-sought goal physics all but abandoned a hundred years ago.

If we can rise to the occasion a rich reward awaits.