You are here: Home > What’s In a Metric? More Than You Might Think

What’s In a Metric? More Than You Might Think

For more than a hundred years a metric has been seen as a good thing. Turns out it’s not; indeed it’s definitely bad.

First, what’s a metric? That gets complicated; it’s an assumed property of space. It’s like a ruler science uses to make measurements of many kinds, like lengths of lines (both straight and curved), volumes and angles. In 1856 German mathematician Bernhard Riemann showed how to use it as a tool of geometry. For example it allows one to say the length of a line is equal to that of another even though the two are far apart in space.

Riemann said continuous space has no natural metric but we can invent one. To do so we must make some kind of artificial assumption. Thus a metric is like a deus ex machina, the artificial device used in ancient Greek theatres to resolve a tangled tragedy so the audience could go home satisfied. And, like the deus ex machina, a metric is itself almost a work of art.

In 1915 Albert Einstein took a step in that artistic direction when he gave the world general relativity. Within twenty years four theoretical physicists (Alexander Friedmann, Georges Lemaître, Howard Robertson and Arthur Walker) separately built a metric for it. Their metric assumes the universe is uniformly the same at any distance and in every direction; and that space and time are continuous as described by general relativity. (Googling FLRW finds more of their story.)

Look out on any starry night with or without a telescope—or look around a room—and you will see that, at our scale and at much larger scales, the universe is far from uniform with distance or direction. But at very large scales FLRW is a good approximation so it is now widely used for physics calculations.

Indeed the uses of a metric are not limited to physics. For example, economics needs a way to measure economic matters. One might say it needs to do its own kinds of geometries. Thus one economist might choose Gross Domestic Product, expressed in terms of a certain currency and reference date. Another might say GDP is a poor measure and choose gross national happiness instead. 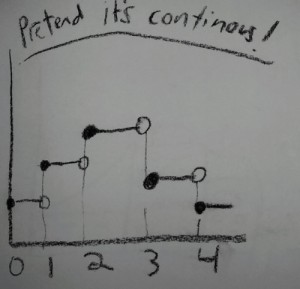 In any field a metric may be useful. But here’s the catch: A physicist (for example) may use a metric to study the universe’s space and time. But she is studying the metric, not the space and not the time.

Riemann tipped us off to this in 1851; but this is little noticed now. He said we need a metric to do geometry in space only if we assume that space is continuous, by which he meant it can be subdivided infinitely many times. Some sixty years later Max Planck won the Nobel Prize in physics for showing us why this assumption is likely wrong.

The alternative, said Riemann, is to assume space is granular, by which he meant it’s made of tiny pieces that cannot be subdivided. Planck showed how to calculate their size.

With granular space one has no need to introduce a metric. One can (as Riemann said) just count the pieces.

This way our physicist can study the universe’s space and time instead of studying the metric. Imagine what a breath of fresh air this could be for physics!