You are here: Home > Finding new physics: How to get a big bang for our bucks

Finding new physics: How to get a big bang for our bucks

Physics has a big problem: How should it decide what avenues to new fundamental physics to explore? The problem is invisible but affects our lives. We could start to fix it if non-physicists—who pay the bills and stand to reap the benefits—recognize it is our problem and also our opportunity: The fix could be worth a staggering amount of money.

The problem starts with the fact physicists are in charge of choosing physics’ funding—for good reason: they understand the issues. As well, each research physicist can choose (or try to choose) what physics to study.

But physicists are what American writer Joanna Russ, with offworldly-apt irreverence, calls yoomin beans; so they have yoomin flailings. Like wanting to win a Nobel Prize.

So physics has fashions like any other human enterprise: At any given time, some issues are seen as sexy and as ripe for Nobel-winning resolution. Right now, Dark Matter is one of them. (That it comes with built-in Caps—like Big Bang—is a sure sign it’s in fashion.)

Here is the short story on Dark Matter: The universe is awash in a vast blast of short-wave radio energy, a cooling vestige of the Big Bang nearly fourteen billion years ago. Observations of this blast reveal the universe must hold much more invisible matter than the stuff we see.

This plays into observations of stars whipping around far too fast in galaxies for their estimated gravity. That is, the stars behave as if each galaxy holds far more gravity-generating matter than the total masses of its stars and its central supermassive black hole. This mystery of missing mass is a century old.

The missing mass is now called Dark Matter. That it exists is bedrock belief for almost all who work this field. The Nobel-pregnant question is: What is Dark Matter? For two decades now, hordes of physicists across the world have been, like Salinger’s Phoebe, running risks in hopes of grabbing the gold ring.

As his Holden says, “You have to let them do it.” But do you have to pay for the stampede (see one contestant’s candid graphic below and pardon my mixed metaphor) after it runs out of chances? 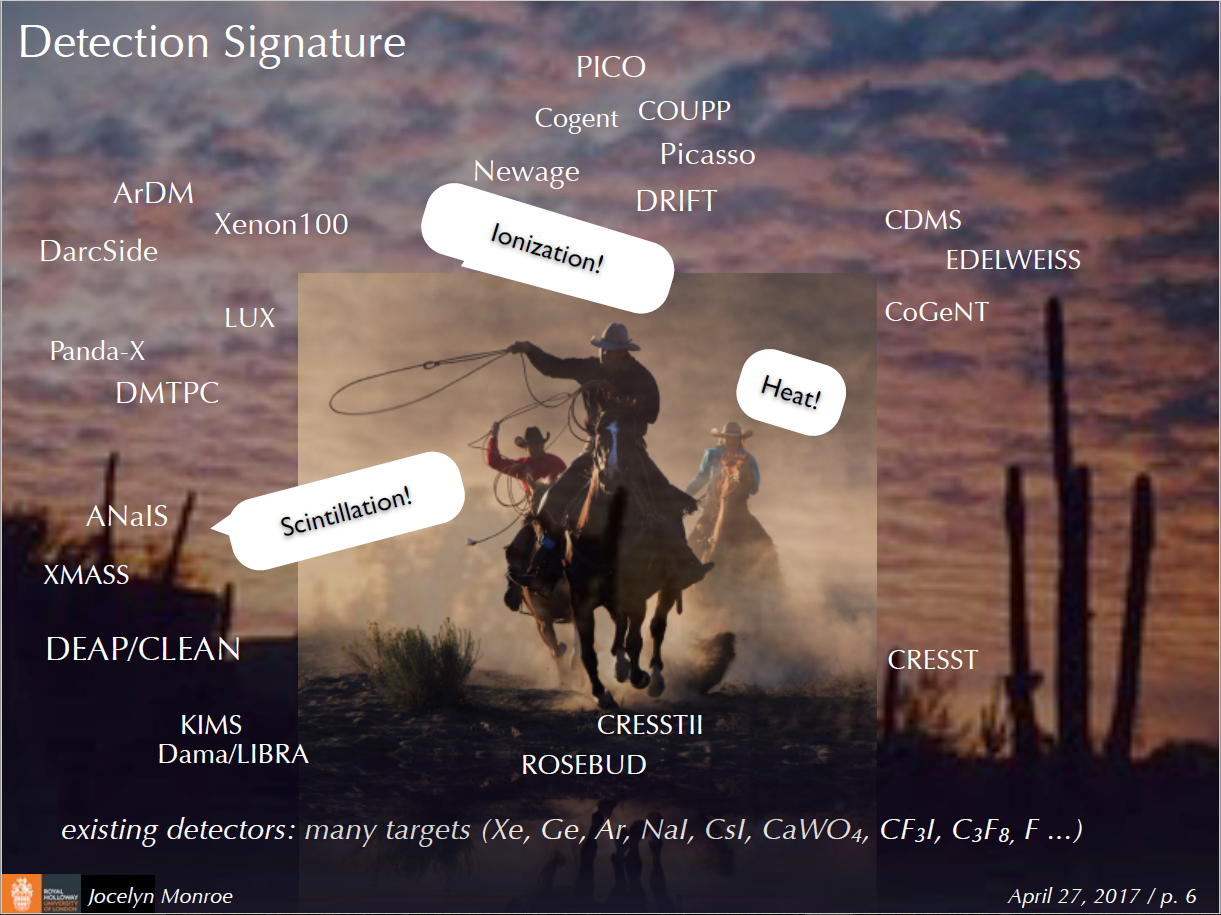 A closer look at one sub-branch of the Dark Matter hysteria reveals how wild this scientific Wild West has become. Many think (or hope) Dark Matter is made of an elementary particle that is not found in the Standard Model of particle physics. Nobel wannabes soon proposed various new particles and, for each, ways they could be detected.

One class of these new particles is called Weakly Interacting Massive Particles, better known as WIMPs. Like the Dark Matter for which they are candidates, their name conjures a simplistic solution: If WIMPs don’t interact at all the experiments are pointless; if they interact but not weakly we’d have long since seen them; and they must be massive to comprise most of the universe’s matter.

Dozens of websites speak earnestly of WIMPs as if they are real particles. Over 25 years, a hundred or more experiments—costing billions of dollars—were run to ask the question: Do WIMPs exist? See the Table for a partial listing of experiments. Their total catch of WIMPs: Zero.

The message is brutally clear: WIMPs are a figment of physicists’ imaginations, no more real than leprechauns with pots of gold at ends of rainbows. But experimenters are planning bigger (and of course more expensive) WIMP searches. What part of NO do they not understand?

Much the same can be said of most Dark Matter searches generally. There’s no good reason to be imagining and then chasing particular leprechauns. The obvious candidate for Dark Matter is the dark matter we already know about: black holes.

The problem with black holes as Dark Matter is we don’t know how there could be so much mass in black holes so early in the universe’s evolution. But other basic problems, like how supermassive black holes became so big so soon—we see them in the 700-million-year-old universe—also require lots of very early black holes. In other words, this tells us something else that we already knew: Our current picture of the first microsecond of the universe’s evolution is no more than math-driven whimsy.

Worse, it’s based on the wrong math. Good reasons—going back to 1856 and Bernhard Riemann—tell us space is granular at Planck-scale, not continuous as physics’ standard math assumes. This makes no appreciable difference for many problems but for the early universe and its black holes the difference is of the essence. As Einstein came to see, what’s needed is granular math the universe uses (real math) not math that makes playing with physics easy (math fiction, as I call it).

Those who pay the bills and stand to benefit from new fundamental physics need a rational allocation of attention (and funding) that has some focus on that problem. Thing is, those who work on fundamental physics invest ten or more years in learning math fiction. Real math (like partially ordered causal sets) may suddenly come into fashion but don’t hold your breath.

It’s not like nobody knows about this problem. Fundamental-physicist Sabine Hossenfelder recently wrote a book about it (noting that this lost her any chance of academic tenure). It’s called Lost in Math and well worth a read; she explores the inside story with a personal approach.

A lukewarm book review in Science says she fails to offer ‘a convincing alternative.’ This is true but maybe a bit harsh.

But then Hossenfelder recently co-wrote an article about the Dark Matter problem—saying we may solve it with a tweak to Einstein’s math.

With this, words fail me!