Another stunning discovery hits the astronomic news: Seems there are big black holes in galaxies all over. This opens a new chapter in the quest to understand the role of black holes in our universe. But its significance may run even deeper: a step toward unraveling the mystery of dark matter.

Last year I reviewed reasons why we may not need to postulate new particles to explain dark matter. Black holes fill the bill quite nicely. They have vast masses of matter; and they are the very definition of dark. But Planck satellite data tell us that dark matter is five times more massive than the matter that we see. So (if I am right) there must be many unseen black holes out there. It is in the nature of black holes to be unseen; no detectable energy can escape them. And big black holes (with masses of millions or even billions of Suns) are thought to hide inside dust clouds at the center of many, if not all, big galaxies. So, if both dark and hidden, how can we find them? Answer: with a telescope that sees through dust and catches them eating. 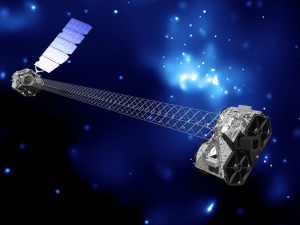 will see long-wavelength far-infra-red light that can pass largely unscattered through dust clouds. Roll on JWST. But meantime, NASA has another space telescope in motion, the Nuclear Spectroscopic Telescope Array (or NuSTAR). NuSTAR swings the other way; it sees X-rays with such short wavelengths they can penetrate dust clouds. And some big black holes drag gas in so voraciously the gas gets very hot just before it falls into the hole and so gives off very short wavelength X-rays.

NuSTAR launched in 2012. Once it was up and running, a group of British astronomers used it to look at nine galaxies that seemed to have a lot of action at their dust-clouded centers. Bingo! This week they announced finding five that are giving off huge amounts of high-energy X-rays. With five of nine they do not need to speculate about the other four to draw conclusions. There are about 170 billion galaxies in the part of the universe that we can see. So, best guess is, at least a hundred billion big black holes. That is a lot of black matter; maybe ten quintillion (1019) times the mass of our Sun. It’s a good start. But it is likely less than one percent of the missing mass that goes under the cognomen of dark matter. In other words, if all dark matter is comprised of black holes, there must be even more of them.

The astronomers’ discovery heightens the significance of many things that we don’t understand. We don’t know how big black holes came into being. Did each grow from a star-sized black hole that sucked in lots of gas, or did it grow by eating stars or other black holes? We see multi-billion-solar-mass black holes less than a billion years after the universe began and we don’t know how, or when, they could form so quickly. Could black holes have formed as the universe was just beginning?

Our ignorance (and so our opportunity) persists at deeper levels. We don’t know what mass is. Mainstream physics says it comes from something that called the Higgs field. But Higgs too is just a label for something we don’t understand. Indeed, we don’t know what a field is. And while we’re at it we would like to know what went on before the Big Bang.

These are exciting times. We are coming closer to some fundamental answers. With new tools like NuSTAR (and a clutch of others) astronomers are getting a variety of kinds of data from an experiment we call the universe. Stay tuned.