“What are scientists missing?” the cover asks. Maybe the answer is: A grasp of quantum space and the topology of twist. 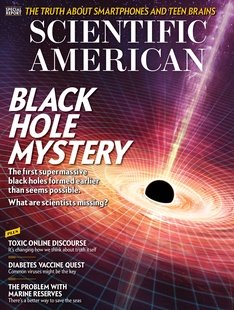 It’s a massive problem in more ways than one. A supermassive black hole is the largest and most massive single object in the universe, larger than the Solar System. It has the mass of maybe ten billion Suns—quadrillions of times the mass of Earth.

Astrophysicists explain how big black holes came into existence: Beginning a few hundred million years after the universe came into being, giant stars—formed from the gravitational pull of big clouds of gas—ran out of fuel and collapsed, forming black holes that held hundreds of solar masses.

In clusters of giant stars their black hole descendants could merge to form bigger black holes with thousands of solar masses. They then grew even bigger as their growing gravity sucked in more gas.

Problem is, this sucking-gas scenario is self-limiting. It’s called the Eddington limit: If gas falls into a black hole too fast it gets so hot the pressure of its radiation becomes greater than the gravitational attraction, blowing gas away and slowing black-hole growth. Thus for a given size black hole there is a maximum growth rate.

The universe began 13.8 billion years ago. So when astronomers recently observed a black hole with 800 million solar masses more than thirteen billion light years away, they knew it was only seven hundred million years old.

Even if its growth rate matched the Eddington limit for hundreds of millions of years, which seems improbable, this black hole could not have achieved its observed mass so soon.

Yet there (and then) it is.

This contradiction should lead to new physics. Natarajan and her colleagues propose one option. It’s a process to form black holes that bypasses giant stars: Perhaps a gas cloud can collapse directly under its own gravity to form a black hole.

Sounds like a good trick; but astronomers have never observed it. Natarajan hopes the James Webb Space Telescope (launch now delayed to March 2021) might catch this process in action. But even if it is observed, it may not be able to create a supermassive black hole soon enough to explain the recent observations.

There is another solution that could start sooner and bigger. It has two parts, neither new; they just need to be put together.

Natarajan mentions the first part. In 1971 Stephen Hawking developed a theory of how random quantum fluctuations in the first tiny fraction of a second after the universe began could create primordial black holes with up to thousands of solar masses. If such things did exist then, they would have had the entire seven hundred million years to grow. Yet maybe even that would not be long enough.

However, Hawking was using the wrong space (continuous) and the wrong math (infinitesimal calculus). These days all signs are the right space is granular (or discontinuous) at the tiny Planck scale and it needs a whole new kind of math to deal with it.

Australian physicist Sundance Bilson-Thompson applied a fundamental kind of math: topology. He showed how to make the known subatomic particles from braided twists in 2D links between the Planck-scale flecks of quantum space. Time One shows how the universe began with one fleck turning into two and two into four . . . with twisted tangled 2D links between them in the first few Planck times.

That is, making space and making matter were (and still are) the selfsame operation.

This scenario does not depend on tiny random quantum fluctuations in continuous space to explain why matter in the early universe would not be uniform. The mass distribution would be dense and messy from the get-go, including primordial black holes with no apparent upper limit on their size.

With its simple assumptions this scenario brings many benefits.  It can help solve other mysteries—like: Why is the universe expanding anyway?

So the simplest solution to the mystery is: Massive, maybe even supermassive, black holes came into existence in the first pico-pico-picosecond of the universe’s life.