You are here: Home > Einstein’s long-lost message tells a tale of what time really is – and really isn’t!

Einstein’s long-lost message tells a tale of what time really is – and really isn’t!

Did Einstein know he left a key to one of the greatest puzzles inflicting physics today encoded in his equations? It has now come to light thanks to advances in two fields—gravity-wave detection and computing.

A recent paper in leading journal Science by German physicist Bernd Brügmann looks technical, but has deep implications so straightforward you can explain them to your friends. They are like a message signed Albert Einstein in an old bottle washing up unnoticed on our shore.

The bottle’s tale begins like this: Once upon a time everybody knew space and time are different. In 1905, Albert Einstein’s four special relativity equations showed how observations in space and time depend on motion.

In 1907, Polish mathematician Hermann Minkowski tweaked Einstein’s equations to blend space and time into spacetime. His simple trick was multiplying time by the speed of light. This made a fourth spacelike dimension, ct, to mix and match with the other three.

It made Einstein’s equations tidier but Minkowski claimed his blend of space and time was real:

‘Henceforth space by itself, and time by itself, are doomed to fade away into mere shadows
and only a kind of union of the two will preserve an independent reality.’

At first Einstein was scornful, but by the time he got to his ten equations of general relativity—with their messy tensor partial-differential math—he liked spacetime’s tidiness. And so for more than a hundred years physicists came to accept that there’s no such thing as distinct space nor is there distinct time. There’s only this inseparable mixture.

While it did make those equations simpler, regarding spacetime as real led to endless trouble. For example, it led to a worldview called the block universe: depending on our motion, we find the past has not yet happened in some places and elsewhere the future happened long ago.

In this view, the boundary between past and future—Now—became ill-defined and, in the end, lost all meaning. The entire past and endless future simply are, this worldview says, though we poor humans cannot see them.

Einstein came to accept this view but Now continued to trouble him. German philosopher Rudolf Carnap quotes him as saying ‘there is something essential about the Now which is just outside the realm of science.’

Yet Now—cast out for a hundred years—has just slipped in quietly through science’s back door, left ajar by Einstein all those years ago. 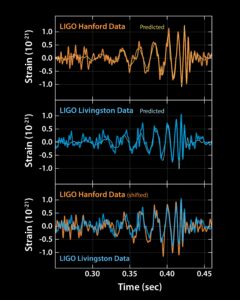 In 2017 twin gravity telescopes called LIGO detected vibrations of space itself from two black holes colliding billions of light years away. Checking these observations against theoretical predictions made solving general relativity’s equations for these strange events a high priority.

Until recently, the equations were solved analytically, but this is possible for only a few artificial circumstances. In particular, there is no analytical solution for colliding black holes.

Instead, supercomputers can solve them numerically. Brügmann’s paper reviews how to do this.

And the answer: Not with spacetime. To make the calculation work one first splits spacetime into an instantaneous three-dimensional space and a distinct time.

In technical terms, Brügmann says: ‘The so-called 3+1 decomposition [of spacetime]… assumes that the manifold (at least locally) allows a split into time and space. Physics is then describable by time-dependent tensors on three-dimensional hypersurfaces … resulting in a “foliation” of spacetime in terms of three-dimensional spaces. Geometrically, we obtain a normal vector … that allows the decomposition of tensors in directions normal and tangential to the hypersurfaces. These are the time-like and space-like directions, respectively.’ 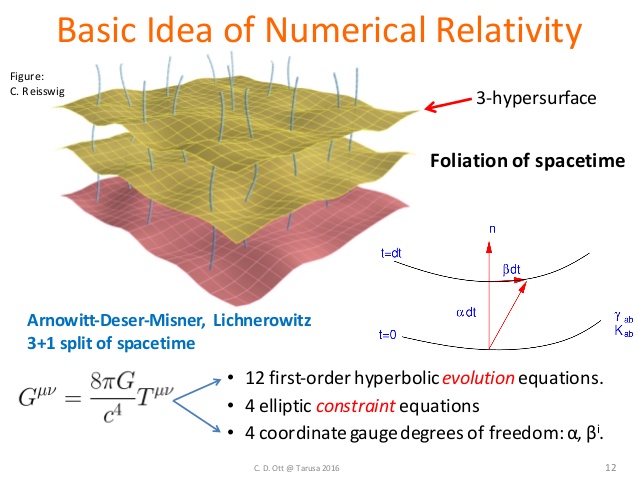 In plain English, that foliation of spacetime is a succession of Nows. This is heresy in the realm of relativity. But it enables us to predict how space shakes after awesome collisions of two black holes (and, more recently detected, two neutron stars).

Spacetime, assembled on the premise that it works easily with relativity’s equations, is now disassembled because it doesn’t work! This disassembly can get physics back on track.

As I have written elsewhere, physics (and its philosophy) took a wrong turn with spacetime. Making its equations simpler was fine. Perceiving it as reality led physics far from the mother lode. To borrow the title of German physicist Sabine Hossenfelder’s recent book, physics became Lost in Math.

Physics needs to clean up its act. A good start: Stop teaching spacetime. Free up philosophy to explore how this 3D foliation defines a unique simultaneity of events throughout the universe, independent of observers’ motions.

Best of all, the foliation points a way to solve the deep problem of time. (This may be harder to explain to your friends.)

Of late, leading physicists are saying time may be a property the universe does not possess (for example, Italian physicist Carlo Rovelli, who gets the problem but not the full simplicity of its solution.)

A simple assumption resolves many difficulties: Far from being numerical artefacts of general relativity, the foliations are real; they are all that is real. Space exists; time does not. Matter and the foliations are properties of space, which replaces itself in unending sequence at the Planck scale where it is granular (i.e., quantized) and what we see as matter’s motion actually happens. It heeds no time.

Time then is exactly what Einstein defined it as in 1905: it is what a clock says, no more and no less. In Relativity: The Special and the General Theory, he wrote ‘… we understand by the “time” of an event the reading (position of the hands) of one of these clocks which is in the immediate vicinity (in space) of the event.’

Cutting out the intellectual middlemen, relativity is not about the properties of spacetime or even of space and time; it is about observing rods and clocks whose large-scale motions actually reflect timeless Planck-sized sub-sub-subatomic changes in successive foliations.

Rovelli says ‘… quantum mechanics cannot deal with the curvature of spacetime, and general relativity cannot account for quanta.’ Resolving this deep divide requires breaking the twin tyrannies of time and spacetime to embrace 3D space and its sequence of foliations.

This embrace needs no partial differential equations. It needs causal set theory because this universe is a causal set.

So, maybe the most important aspect of Brügmann’s work is the little-noticed implications of the message it bears from Albert Einstein.