You are here: Home > LIGO’s Tiny Twitch is a Big Deal

It may be the top science story of this century so far (though I hope an even bigger one is coming): 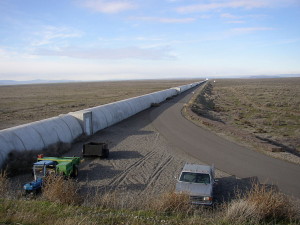 Physicists detected gravitational waves; you can hear them here. This discovery has profound implications for the future of cosmology. It will affect our lives in ways we cannot yet conceive.

It was a long time coming. One hundred years ago, Albert Einstein predicted waves of gravity based on his math. But he said they were too small to detect. Sixty years later a slight slowdown in the clocklike signal from a spinning neutron star in binary orbit matched the predicted loss of energy by gravitational waves, a measurement that won a Nobel Prize. Soon most astrophysicists accepted that the waves exist. But nobody had observed them directly. It was not clear that anybody ever would.

An international project did was (till now) widely dismissed as a crazy waste of money. It is known as

LIGO and looks like two long farm sheds. It bounces a laser beam off distant mirrors to see if they vibrate by a miniscule fraction of the size of an atom. Well, of course they do! On that scale they thrash about wildly with vibrations from distant earthquakes, far-off traffic noise or even an indiscreet cough. Its keepers use many clever ways to eliminate such influences. Then they wait for some humungous event out there to radiate a gravity-wave signal. They check a duplicate setup 3,000 kilometers away to see if it got the same signal.

Last Thursday, the LIGO team announced laconically in a prestigious peer-reviewed journal that, ‘On September 14, 2015 at 09:50:45 UTC the two detectors of the Laser Interferometer Gravitational-Wave Observatory simultaneously observed a transient gravitational-wave signal.’ Convincingly they show this signal is the real thing. It matches the expected signature of an extraordinary event, two big black holes colliding more than a billion years ago. It was an enormous cataclysm. More than a billion light years away here on Earth, LIGO started listening just in time to catch its thinned-out wave as it swept by.

Observing this event reconfirms Einstein’s theory of general relativity. It is a shoo-in for a Nobel Prize. But it means much more.

First, it opens up a whole new capability. Since the days of Galileo we’ve used different kinds of ‘eyes’ to see what happens in the universe with electromagnetic waves. Now gravitational waves give us another cosmic sense. Who knows what we will see with it?

Second, until now black holes have been the subject of much cosmological theory backed up by indirect observations such as stars moving in tight orbits around nothing visible. Now we are observing black holes directly.

Third, we have discovered a new class of black holes. Black holes with multi-million solar-masses may lie at the centres of galaxies.  Black holes with up to ten solar masses are thought to result from collapse of stars. The two black holes LIGO observed colliding had masses about thirty times that of our Sun. This is a size that astrophysics says should not exist. The LIGO event shows they are so common that two of them could get together. As I predict on fundamental grounds, intermediate black holes like these may be the universe’s missing Dark Matter.

And fourth, gravitational waves—now known to exist and to behave as theory expects—may let us see through the opaque hot plasma that blocks our view of the first 370,000 years after the universe began. They could address the ultimate question: What happened before the Big Bang? A half dozen projects that could answer this are underway today. When one succeeds, that may be the biggest science story ever.