You are here: Home > A New Eye on Our World

A New Eye on Our World

Think for a moment about the big picture of physics research. New physics comes from analyzing strange events. That’s why the biggest and most expensive 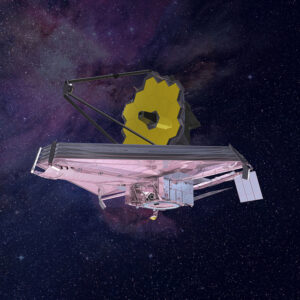 experiments create strange events. Such events usually happen in small volumes for brief times. For example, the $10-billion-dollar 27-km-long Large Hadron Collider (LHC) mashes two protons into a subatomic-sized volume for a trillion-trillionth of a second and watches what pops out. Meanwhile the universe creates huge—and very strange—events for free and they last hours or weeks or even millions of years.

Twenty-five years old last week, the Hubble space telescope has investigated many strange events and so transformed our vision of the universe. Its pictures are spectacular. And now we have an even bigger treat in store. Due to launch in 2018, NASA’s James Webb Space Telescope (JWST) promises to humble Hubble. But why would we spend billions on a new telescope? What bang can we expect to get for all those bucks? The basic answer is: It will enable us to find new physics and—let’s not forget—new physics drives the economy.

Here’s how it works. It’s not that Hubble’s wearing out (although it is); it’s that Hubble has its limitations. For starters its 8-foot diameter mirror is small by today’s ground-telescope standards. It sets a limit on the detail of those spectacular images. The 21-foot-mirror JWST will have better resolution. But—much more significant—JWST can detect far-infrared light so it will see new kinds of views that are entirely hidden from the Hubble.

What Hubble sees is limited by the light it can detect. Mind you, it can see some near-infrared and ultraviolet light that our eyes cannot. (Pictures taken in those colors are recolored for us by computer.) But JWST will see far-infrared light that Hubble cannot. It will be like having night-vision goggles. Strange events revealed by far-infrared light are of special interest for two main reasons.

Recall that space has been expanding since the universe began. After the Big Bang, the expanding universe cooled and went dark for a few million years. Physics figures it took maybe 300,000,000 years for gravity to clump gas into the first stars, and more millions of years to form galaxies. Expanding space stretched light on its way to us from those stars and galaxies into far-infrared colors. So JWST (but not Hubble) can see light emitted when the universe was only a few hundred million years old. Views from those early years should show us the first stars and the first galaxies forming.

And the JWST’s extended color-vision will reveal other strange events. For example, a supermassive black hole (four million times more massive than the Sun) is thought to be at the center of our galaxy, in a region called Sagittarius A. It is hidden by dust that scatters light; looking for it is like trying to pass a semi in a snowstorm. In fact, vast clouds of dust hide many of the most interesting places in the universe. But far-infrared light passes through dust clouds like radar. Soon we will be sussing out new secrets with JWST.

Back to that big picture: One attraction of an Earth-bound atom-smasher like the LHC is it lets us choose (within its limits) which strange events we want to create. But every day the cosmos creates many strange events that we could never see on Earth. And these events are free. New telescopes like JWST let us choose which events we want to watch. With them we can get more bang for our physics bucks. And by peering deeper into space and time we may start to understand our world at the very smallest scale by seeking understanding at the very largest scale—the scale of the universe.

Coming: New eyes on the ground

NASA, “How does the Webb contrast with the Hubble?”, http://jwst.nasa.gov/comparison_about.html