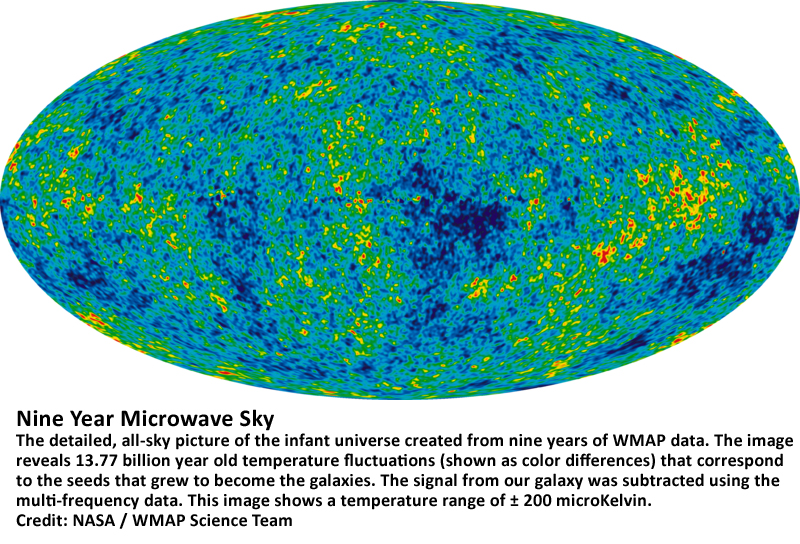 News from the Planck satellite is almost 14 billion years old. It’s coded in cold photons from the Big Flash, let loose about 380,000 years after the universe began and stretched as space expanded while they winged their way. The photons reaching Planck bear the same message as those seen by COBE and WMAP but Planck gets a better picture. It adds precision to what we already knew: Five-sixths of all the universe’s mass is missing. It’s called dark matter. But what is it? We know it acts like mass: It has gravity and hangs around with galaxies. It emits no light. If this description were an all-points bulletin, there would be arrests and I think the mug shots would depict black holes. The idea that black holes are the missing matter is fairly recent. But it is not in fashion. Fashion is as big in physics as it is in Paris or Milan. Current fashion says dark matter may be some new fundamental particle that might show up in the Large Hadron Collider. As fashion should, this sounds sexy but no one ever sees it. By contrast black holes are now being seen all over. Seen, that is, through their effects. Astronomers now look to find a big black hole―with the mass of maybe a billion stars―at the center of each galaxy. The Milky Way’s is called Sagittarius A*. The speeds with which things whip around it say its mass is some four-million times our Sun’s. A scary thought for you: Right now you are in orbit around a big black hole. Few now doubt that there are many smaller ones. American journalist Michael Finkel (yes, I know he cooked a story but he can turn a phrase) says:

Some say though they’re there, there are too few of them to total five-sixths of the universe. But spotting, say, a merely one-Sun-sized small black hole is tricky. Not spotting doesn’t mean that they’re not there. And so, as British astronomer Mike Hawkins says:

I have a certain bias in their favor. In Time One I show how black holes can explain something else: Curvature of space near a black hole may cause space quanta to replicate by quantum tunneling, just as they did when the universe began. Space-spewing black holes may explain why space is expanding. And greedy big black holes gorging themselves over the past several billennia could cause the expansion to accelerate as recently observed. Of this concept American space physicist David Miller says:

This concept eliminates the currently accepted need to postulate a previously unimagined and mysterious dark energy to explain the acceleration of the expansion.

Indeed this single concept solves four physics mysteries―How did space begin? What are black holes? Why does space expand? How can it accelerate?―and explains them in a way you and your friends can understand.