You are here: Home > Kissing Cousins

Sex may be mostly private, but sometimes clues can tell you that a couple has got something going on. That’s not unusual. But here’s a story of ancient history coming to life that is unusual. It’s about an interspecies coupling of a Homo sapiens and a Homo neanderthalis forty thousand years ago, and of how we know.

The clues that tell us that this happened are all about long odds. Imagine that you’re playing bridge or whist or any of those games and you pick up this hand and see that it’s already sorted: 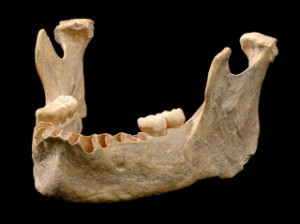 Something like this happened to Chinese geneticist Qiaomei Fu. She and her colleagues at Harvard Medical School were studying a 40,000-year-old fossil. A team led by American anthropologist Erik Trinkaus found it thirteen years ago in a cave in Romania. It was the jawbone of a young man (known as Oase, for the cave’s location). At the time Trinkaus said that the jawbone’s shape shows traces of our closest cousins, known informally as Neandertals. Now genetic analysis of DNA fragments recovered from it shows that perhaps as much as 11% of its DNA is Neandertal. That’s higher than the few percent that’s found today in all of us (except Africans who have none; click here to find out why).

The gene sequence revealed more than this. The Neandertal DNA was mixed in with the human genome in long fragments. To see the meaning of this observation we need to know about a double cell-division process called meiosis. Meiosis makes the germ cells (eggs and sperm) of sexually reproducing organisms. Human cells have twenty-three pairs of chromosomes (total 46; called diploid) with one of each pair coming from each parent. Human germ cells have twenty-three—only one copy of each; called haploid—thanks to meiosis, so egg plus sperm makes the diploid forty-six again, twenty-three from each parent. But here’s the key, meiosis swaps chunks of chromosomes, carrying blocks of genes inherited from each parent to the other chromosome. So when meiosis separates the pairs into two haploid germ cells, each of them has a parental mix. This shuffle is what sex is all about!

There is almost zero chance the chunky shuffle of Oase’s DNA was random. Nor could it have survived for more than a few generations. Successive shuffles blend the grandparental contributions; like a shuffled card deck, their distinctive close associations are soon lost. So finding long stretches of Neandertal DNA in Oase’s cells told the Harvard team he had a great-great-great-grandparent who was Neandertal. DNA can’t tell us how this happened. But evidence such couplings did happen offers us new insights into who we are.