You are here: Home > Twin mysteries: A ghostly fundamental particle and a physicist who disappeared after saying its antiparticle may not exist

Twin mysteries: A ghostly fundamental particle and a physicist who disappeared after saying its antiparticle may not exist

Twin mysteries arose around 1937 when Italian theoretical physicist Ettore Majorana suggested neutrinos are their own antiparticles. Soon afterward he took the night ferry from Palermo to Napoli and vanished, leaving us to ask: What happened to him; and was he right?

The Standard Model has a place for every known elementary particle. It says each must have a corresponding antiparticle. The antiparticle is like the particle traveling backwards in time. When any particle meets its antiparticle both vanish in a flash of energy.

The neutrino (symbol ν, pronounced new) is an elementary particle like an electron with zero charge and tiny mass. Both it and its antiparticle have places in the Standard Model. The Sun blasts torrents of them into space. Trillions zip through your body every second, leaving no trace. At night they keep coming at you, zipping right through the Earth as easily as if it were not there.

Physics takes Majorana’s antiparticle idea seriously; but the neutrino is so elusive, experiments do not yet provide an answer. 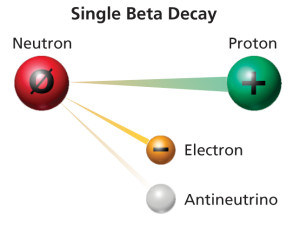 How can physics determine if an antineutrino is a neutrino with the wrong name tag? The starting point is that a proton would prefer to be a neutron but—luckily for us—making this switch isn’t easy. (It’s lucky for us because we’re mostly made of protons.) But it can happen. When it does the proton ejects an electron and an antineutrino.

Physicists observe some radioactive nuclei can double up this process. That is, two protons become two neutrons by emitting two electrons (aka beta particles) and two antineutrinos. This is called double beta decay. 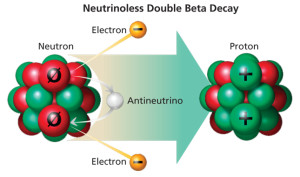 If Majorana was right, theory says double-beta-decay can also happen without emitting the antineutrinos. That is, if the antineutrino (or neutrino) is its own antiparticle, they can annihilate each other before they get going. This is called neutrinoless double beta decay. Physicists have not yet observed this process. They are trying hard.

In 2008 Australian physicist Sundance Bilson-Thompson proposed that all of the supposedly elementary particles of the Standard Model are composite; they can be constructed by braiding a truly elementary entity he calls a tweedle—a simple half-twist. Looking at his braids you see each particle of matter must have its corresponding antiparticle—except the neutrino. It is its own antiparticle!

This twist-and-braid topology is the only theory that explains what an elementary particle actually is. And it leads to the unavoidable conclusion that the antineutrino is the same thing as the neutrino.

In other words, this elegant theory says our missing physicist was right. (There are less elegant theories about his disappearance.)

And before the Big Bang? Time One builds on Bilson-Thompson’s topology and on father of the Big Bang Georges Lemaître’s concept that the universe began as a single quantum. It shows how, right after its first instant, the universe was just two flecks of space linked by two tweedles.

The great attraction of Bilson-Thompson’s theory is that an extremely simple assumption can explain so much about so many particles and their interactions.  Time One shows how building on this same theory can explain forty-six problems that bedevil science.