You are here: Home > This physicist discovered four-fifths of all the matter in the universe but managed to miss out on a Nobel Prize

Vera Rubin was a very rare bird forty years ago: a female astronomer. Galaxies were her life’s work. In her day the notion that there are many galaxies outside our own was only a few decades old. Inspired by her ‘just plain old curiosity’, her PhD thesis suggested galaxies are not scattered randomly: they come in clumps. Now tried and true, it was a novel observation for its time and so was roundly dissed by other astronomers. Undeterred, Rubin scrounged access to big telescopes and took a closer look. 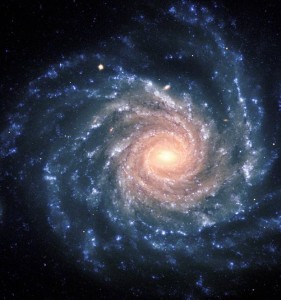 Most of the universe has very little matter in it—only a few atoms per cubic meter. Scattered at vast distances through space are galaxies, each of which holds tens or hundreds of billions of stars. The gravitational field resulting from a galaxy’s assembled mass keeps each star in its galactic orbit.

Rubin went on to study the rotation of galaxies. The theory was thought to be well understood in terms of gravity and orbital mechanics. The gravitational attraction between each star and every other star is (said Isaac Newton) decreased by the square of the distance between them. Each star’s orbit is determined by the combination of all those attractive forces. Thus, at a galaxy’s center, gravity pulling from all sides would cancel out so stars would hardly move to maintain their location at the center. In the galactic arms, stars would need to orbit fast. And near the edge, theory said, gravity is weaker so stars would orbit slower.

Rubin was a lifelong skeptic about theories. She wanted to test them against what she could observe. Despite being low on the list for telescope time she built a strong body of data. It showed the theory was wrong. Far from decreasing with distance from the center, velocities of stars further out in the galaxy’s arms were faster. Her observations were so compelling that, as she later said, ‘no one doubted the data’.

In hindsight, this behavior could have been expected. How else would those spiral galaxies maintain their shapely arms?

Her observations gave birth to the concept of Dark Matter. If Newton’s law of gravity was right then galaxies must hold far more mass than all the galactic matter that was observed and it must extend some way beyond the visible center. What the invisible mass might be made of is still a mystery. (Last year I argued it is mid-sized primordial black holes. A recent paper at an American Physical Society meeting agrees but it remains controversial.)

Measurements now show Dark Matter makes up more than four-fifths of the universe’s matter. You’d think anything that original and that big and that well-confirmed would be a slam-dunk Nobel Prize.

The New York Times said: ‘Her work helped usher in a Copernican-scale change in cosmic consciousness, namely the realization that what astronomers always saw and thought was the universe “is just the visible tip of a lumbering iceberg of mystery.” ’

Helped usher in …? I would say led to. In my view that should have been the wording for her Nobel citation.

Vera Rubin loved her work. She was intrigued by cosmology and the beginning of the universe. It seems she never said a word about ambition for a Nobel. She died two months ago.