You are here: Home > This universal principle created all space and matter from the beginning of time. Today, it’s still creating strange phenomena around the world.

This universal principle created all space and matter from the beginning of time. Today, it’s still creating strange phenomena around the world.

Emergence is the source of all the laws of physics. Strange spots called fairy circles illustrate the way emergence brings new fundamental properties into the world, including space and matter. 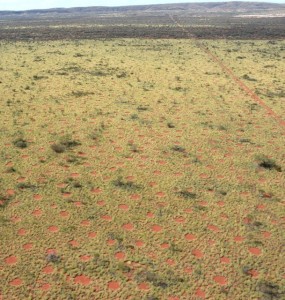 There are millions of them. Bare patches in grasslands, remarkably well-defined, regular in shape and spacing, and ordered in a roughly-hexagonal array over long distances, they look like a bad case of measles when the grass is green. They are found in just two places—arid plains in Australia and Namibia—10,000 km apart. A new study that sets out to explain this phenomenon also sheds light on far more fundamental questions about the nature of our world.

Over the years there have been many theories about the origin of fairy circles. Underground activity of termites and competition between grass plants for scarce water are two common candidates but neither one works very well. Now in a report in leading scientific journal Nature a team of biologists shows how interactions among plants and termites can explain all aspects of the strange phenomenon.

They use a computer model. The model simulates the grasslands ecosystem: things like the competition between termite colonies for resources and the dependence of grass growth on moisture in the soil. And there’s the rub (as Shakespeare said of a much simpler problem): To describe all the interactions, their model needs thirty-seven adjustable parameters. True, many of their values are constrained by field measurements in Namibia. But large numbers of parameters (which I have criticised elsewhere) make for models that have at most modest explanatory power. 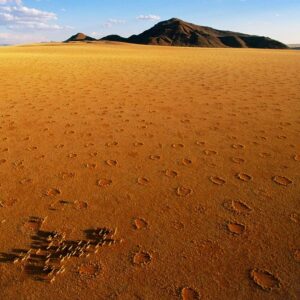 Yet it seems likely the underlying science is on the right track. One thing is clear: Grasses do not have the property of clearing circles; nor do termites. The ordered circles are a new property that arises from interactions between billions of individual components (ants and plants), each one of which knows nothing of vast fairy-circle patterns.

This phenomenon is called emergence.

Emergence is a formative principle of the universe. My book Time One explores in detail how seemingly smooth space emerges from vast numbers of string-theory-like quanta. For simplicity I call them flecks. Australian physicist Sundance Bilson-Thompson shows how all the Standard Model particles of matter emerge from twist relationships. For fun he calls them tweedles. I say tweedles are twists between flecks. Everything we see and all the space it’s in are made of them and nothing else. 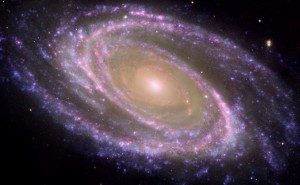 Space and matter emerged in the first tiny fraction of a second of the lifetime of the universe. Their emergence was the source of all the laws of physics. Thus just as in the case of fairy circles—emerging billions of years later—we can see why the laws of physics are not quite perfect. In principle these laws do not express exactly what is happening; rather they are statistical approximations—very good approximations for sure when the numbers of individual components are extremely large (which is not really true for fairy circles).

Last but not the least lesson from fairy-circle-world, we see why physics’ two great bodies of laws—quantum theory and general relativity—are irreconcilable. Like fairy circles and galaxies these laws emerge from the same properties of space and matter. And like fairy circles and galaxies they reflect distinct emergences at vastly different scales.