You are here: Home > The Value of Good Science

The Value of Good Science

Danish political scientist Bjorn Lomborg makes a high-profile case against spending on Ebola. It may be good politics, but is it good science? Why should we care? One reason is that scientific thinking on Ebola could save lots of lives and staggering amounts of money.

Science is a driver of our economy. Science is why we don’t live in caves (and even cave-living used science). It works for us in two ways. Scientific research leads to new and improved technologies. And scientific (i.e., evidence-based) thinking leads to sound decisions. That’s the upside. The downside is that pseudo-science can drive bad decisions with catastrophic consequences. 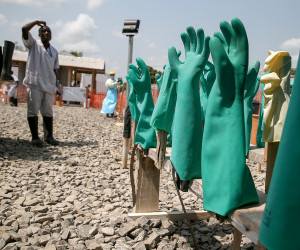 to stop an Ebola epidemic in West Africa. Just in time; it was spreading into crowded cities like wind-driven wildfire in dry brush, with health workers washing and re-using rubber gloves. More recently there was good news about Ebola vaccines. They are an example of new technology. Using them will cost more cash. Should we spend it? Dr. Lomborg says we should not. He favours tackling infectious diseases one at a time, based on cost per cure, which he seems to conflate with cost per person killed. He says:

Ebola got most of the attention in 2014. It killed about 8000 people. Meanwhile, over the same period of time about 3.6 million people died from HIV/AIDS, tuberculosis and malaria.

This sounds scientific, but evidence-based thinking says that his analysis is pseudo-science. The economic case for spending on stopping a disease isn’t based on how many it kills. It is based on how many (and how much) the spending saves. If Dr. Lomborg’s view prevails, it could cost us all dearly.

The scientific evidence from last year’s (largest ever) Ebola epidemic is: 71% of those infected died. The virus had a basic reproduction rate R0 (number infected by each one who got it) of from 1.71 to 2.02. With insufficient action the number of cases was doubling in from 15 to 30 days. With these data we can sketch Ebola’s progress if there were no new action. The case load would have exceeded 20,000 by early November 2014. By June of 2015 deaths in West Africa would reach a million and cases would be showing up around the world. (Travel bans won’t stop it; but they will block tourism, trade and epidemic aid.) In cities with modern infrastructure it is easy to contain Ebola. In cities with poor infrastructure most would be exposed and more than half would die. In Africa and South Asia more than three hundred million people live in big chaotic cities (excluding those in China and Japan). Dozens of cities would become epicenters. You get the drift. World-wide, the economy and social order would collapse.

There are precedents. A century ago a less deadly virus (called Spanish flu, though it began in France) killed about a hundred million. Today, cities are bigger. The global economy is more dependent on trade. It would be no surprise if total economic impact were to reach hundreds of trillions of dollars. We don’t have evidence for that number. But if Dr. Lomborg gets his way we may.

Fact is, on any view of this scenario, we dodged a big bullet. That billion dollar bet to stop Ebola was the best investment in the world. So, keeping in mind Ebola is a nosocomial disease (spread by the heroes who seek to stop it) and there is no cure, let’s put our next bet on vaccines. Even a half-effective vaccine will stop the next Ebola breakout—there will be one—in its tracks. First step to stop it, let’s ask Dr. Lomborg and his ilk to get with the facts. Next, let’s make and test and stockpile at least two vaccines. And let’s vaccinate the world’s health workers.

Then we can all breathe a sigh of relief.