How about a multi-billion-dollar good-news story? Science may have found a way to grow more food. It’s a source of nitrogen: bacteria that live in leaves. It may be worth a mint in new ecosystem services, which is a name for what Earth does for us by being there.

Here’s the scene you need to see to understand what a big deal this is. All animals need nitrogen to build their bodies. Nitrogen is about 16% of the mass of proteins in our muscles. There are on average almost four nitrogen atoms in each base (A, C, G or T) of our genetic code. No substitutions allowed. That’s no problem, you might think; nitrogen is 78% of air. Yet there is a problem: We can’t use that nitrogen. It is tied up with itself as N2 molecules. So all the nitrogen we use arrives in us as food. How does food get its nitrogen? We have long known two main sources. One starts underground with natural gas that fertilizer factories react with air at high temperatures to make ammonia. The other stays underground where bacteria make ammonia from air at normal temperatures in nodules on the roots of certain plants. Plants need nitrogen to grow. They too can’t directly use the nitrogen in air. So some plants—like soybeans, clovers and peanuts—team up with bacteria that can fix nitrogen, that is, convert it into a compound like ammonia that plants and animals can use.

These two sources—factories and plants—have different costs and consequences. The factories need money, first to build them, then to buy natural gas. World-wide, they fix about a hundred billion dollars’ worth (140,000,000 tons) of nitrogen per year and emit roughly the same amount of carbon to the atmosphere as carbon dioxide (CO2). Farmers spread ammonia-based fertilizer on their fields; some washes off and pollutes waterways. By contrast the plants (mostly legumes) and their bacteria work for free, or rather each draws on support from the other. The plants build root nodules that keep oxygen away from the bacteria (oxygen wrecks their fixing enzymes) and the bacteria make fertilizer for the plants. World-wide they are thought to fix about 100,000,000 tons of nitrogen per year for farmlands. I recall that we sowed clover with the ryegrass in our stony Aussie hayfield so that as clover roots died they would fertilize the rye. And plants don’t emit CO2; indeed they suck it from the atmosphere.

Now for the new discovery: bacteria in stems and leaves. Not on but in. Called endophytes, they live 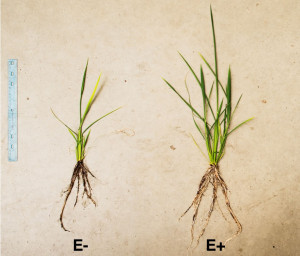 among plant cells but cause no disease. The existence among them of bacteria that fix nitrogen while exposed to oxygen is something of a recent revelation. How much nitrogen they fix is still unknown. How much more they could fix is a fascinating question: nature grows a lot of leaves. American microbiologist Dr. Sharon Doty wondered why poplars grow so fast. She showed they harbor nitrogen-fixing endophytes.

Rice is the single most important food crop on the planet. The world grows almost 500 million tons per year, much of it from high-yield plantings that use fertilizer. Dr. Doty found that rice seedlings inoculated with poplar endophytes produce more rice grains. No factory-made fertilizer is required. That’s just the rice story; endophytes are found in every kind of plant that has been studied. The potential implications for cost and security of the world food supply are huge, on a scale of billions of dollars.

It will need more research. Stay tuned to the Doty channel.