You are here: Home > I’m from Missouri…Show Me!

Finding new drugs these days is largely done with quantum mechanics. Fifty years ago it was more like what the Brits (and the indie rock band Arctic Monkeys) call suck-it-and-see. So thousands of Americans don’t know that they have arms and legs and normal lives thanks to the courage of a Canadian—and American—physician. She says she was just stubborn. You decide. 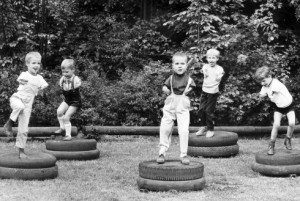 Dr. Frances Kelsey is a pharmacologist. In 1960 the U.S. government hired her as a medical officer at the Food and Drug Administration. Her job was to review data on new pharmaceuticals and approve them if they were safe. A new sedative, thalidomide, was one of her first files. Under the name Contergan it was already selling well in Europe and the UK. She asked for evidence to show the drug was safe, especially for pregnant women. The drug company claimed it was safe but did not produce the evidence that she demanded. The drug lobby’s pressure was heavy. But she did not approve thalidomide for sale in the United States.

Within two years pharmacists were pulling thalidomide off shelves across the world amid reports of stillbirths and children born with defects such as deformed arms and legs. How the drug affects the fetus is still unclear. The molecule is similar to certain sites in DNA (guanine bases). Quantum mechanics may someday explain the details. 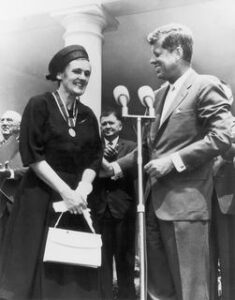 confidence in her professional decision’. Today, untold numbers of unaware Americans in their fifties owe her for their limbs and even their lives. And, thanks to her, their mothers lived without guilt and anguish; and their children in turn have mothers who raised them just like other moms. The whole world owes her even more. Her stand (it sounds to me like courage as well as professionalism) gave us a case study of why we all need evidence-based policy, not politics-based policy. That idea (which dates back to amateur pharmacologist Sir Arthur Conan Doyle and his creation, another amateur pharmacologist, Sherlock Holmes) knows no national bounds.

Like others in the 1960s, the government of Kelsey’s birth country opted for a don’t confuse us with the facts approach. Canada was slow in pulling its approval for the drug. It recently offered financial support to thalidomide survivors. In doing so it highlighted ‘the role the thalidomide experience played in the overhaul of regulations’. I would like to think that Dr. Kelsey’s scientific message comes through loud and clear to politicians: Follow the evidence.

Dr. Kelsey retired from the FDA ten years ago and will soon celebrate her one hundred and first birthday.

Ingrid Peritz (2014), “Canadian doctor averted disaster by keeping thalidomide out of the U.S.”, The Globe and Mail, November 24, http://www.theglobeandmail.com/news/national/canadian-doctor-averted-disaster-by-keeping-thalidomide-out-of-the-us/article21721337/

National Library of Medicine, Images from the History of Medicine, A018057, http://www.nlm.nih.gov/changingthefaceofmedicine/gallery/photo_182_1.html