You are here: Home > The speed of light is a longstanding mystery. Planck-scale physics provides an elegant solution.

The speed of light is a longstanding mystery. Planck-scale physics provides an elegant solution.

By 1900 the speed of light was known to be a constant. Many experiments had measured it. In 1905 Albert Einstein took a giant leap forward. He said this cosmic speed limit—denoted by the symbol c—is not just a measured fact; it is a fundamental property of the universe. This became the basis of his theory of special relativity. It also gave rise to a deep mystery: Why would this be so? New Planck-scale physics concepts have an explanation. 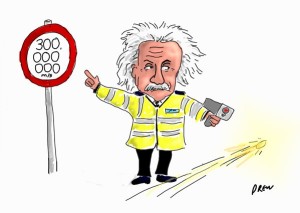 Over the last hundred years some pondered on this. Though c is now part of accepted reality, its mystery endures. It seems to depict a basic ratio of space to time. Why would there be any ratio between such different concepts? And why would that ratio have the value that it has—about 186,000 miles or 300,000 kilometers per second—rather than some other number?

At the time few noticed Einstein’s theory also assumes space and time are continuous: each may be subdivided infinitely many times. This assumption lies at the foundations of his mathematics. Almost all physicists share this same math. Few recall that one of its founders, German mathematician Bernhard Riemann, pointed out some fifty years earlier that assuming space to be granular—that is, not continuous—might lead to more meaningful math. Indeed physicists took continuous space for granted and stopped citing Riemann’s work when they used it.

Physics was soon seduced by the convenience——introduced by Hermann Minkowski—of multiplying time by c so as to bundle it with the three space dimensions into a 4D “spacetime”. Many decades later measurements showed that spacetime—though widely used and taught—does not reflect the nature of the universe. They show that 3D space exists. We experience this as the present instant.

Relativity is interpreted as saying we cannot define an instant that is simultaneous throughout the universe. This too is widely taught but empirical evidence now shows it is wrong. And increasingly physics is coming to grips with Riemann’s concept that space is indeed granular at the tiny Planck size.

So let’s go with granules (or flecks) of space. What then do we make of time? Making sense of Planck-scale physics leads one to conclude the universe itself does not have the property of time. Time as we conceive it comes from seeing 3D motion. Motion happens because the 3D universe of flecks rapidly replaces itself with a successor, a concept known as a foliation. Each foliation is a whole new 3D universe of flecks. It does this every Planck time (or tock)—as we measure such matters “inside the universe” by watching things in motion.

The Planck size (fleck) and Planck time (tock) are fundamental constants of the universe because this is the way the universe is made. Their tiny magnitudes are now well-known (thanks to Max Planck who earned a Nobel Prize for deducing them from structure of the atom) and measured to eight-digit precision.

In 2008 Sundance Bilson-Thompson showed how particles of matter and energy can be composed of twists in the fabric of space. His photons consist of twists moving in space. Of course they move at the speed of light. At each foliation their twists have shifted.

So let us ask a Planck-scale question: How fast—in flecks per tock—are the six light-speed twists that make up each of his photons moving? The answer is: 1.00000000.

This is in itself neither a great coincidence nor laden with deep meaning as each can be calculated this way from the other. It invites us to think about a simple rule the universe may follow: In each new foliation a twist may move no further than one fleck.