You are here: Home > The Window into Planck-Scale Physics

The Window into Planck-Scale Physics

He that breaks a thing to find out what it is has left the path of wisdom.

How can we possibly develop Planck-scale physics? Since 1899 we’ve known that Planck scale is incredibly tiny. We need to go there; it’s where the real action is. New theories (such as string theory) tap into it. But at Planck scale the usual experiments won’t work. We need a whole new approach. Here is why we need it and where we can find it.

A hundred years back physics learned to study atoms by smashing them and tracking pieces. Gandalf’s dictum notwithstanding, breaking atoms served science well. But studying ever smaller things this way takes ever larger energies. Protons are some hundred-thousand-fold smaller than an atom. These days the 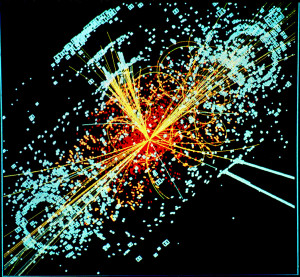 A simulated Higgs-boson event in the LHC

$10-billion Large Hadron Collider smashes protons with the focused energy of speeding locomotives. Planck-scale objects (like, maybe, electrons) are a quintillion times tinier than protons. Even if we had the money there is no way we can ever bring to bear the energy to study anything so small.

Theory’s agreement with experiment tests is central to the scientific method. How then can physics make progress at Planck scale?

Necessarily, the answer will involve what we can learn from larger stuff that we can study. Larger here meaning anything from subatomic particles like quarks to big black holes and even (as American physicist Lee Smolin and co-author Brazilian philosopher Roberto Mangabeira Unger say) the whole universe as a singular entity.

But wait! We already have a vast body of data about this larger stuff. There seems scant cause to hope that more or better data will offer a window into Planck-scale physics. Maybe we need a new approach to how we do physics. Or could it be revival of an old one? Smolin says ‘my real job is to finish the revolution Einstein started. I haven’t done that job.’ He is still trying. So how did Einstein start the revolution?

Albert Einstein was a student of philosophy in an era when—and in a country where—the philosophy of science was widely debated. He was himself a leading philosopher, though his physics often overshadows this aspect of his legacy. Most important for our inquiry, his physics was driven not by his math but by his philosophy. Which is to say: He wanted to understand. Philosophy was his guide; math was a tool that in extremis he would discard.

His approach has long been out of fashion. Serious scientists (Neil deGrasse Tyson comes to mind) now deride philosophy as useless. It’s true some recent philosophic papers seem like counting angels on the heads of pins. But we now need a working window into Planck-scale physics. Lacking smashing we need understanding. In other words we need philosophy re-established in its old role of handmaiden (excuse the historic sexism) to physics.

How do we do this? First off, let’s make sense of those data that we’ve got. For most of the past century physics has fallen out of this good habit! In 1900 two small inconsistencies toppled the edifice of physics. Today’s physics is in far worse shape. It is riddled with big inconsistencies. Time One examines forty-seven of them; there are many more.

Physics needs a new Planck-scale narrative, one that can make sense of all those inconsistencies. By all means bring on more philosophers like Unger. Better yet, bring on more physicists like Smolin who are willing to think unthinkable philosophy: that the shiny new edifice of physics is just as wrong as was the old one.

A consistent explanation of what we know already is the window into Planck-scale physics.

Lee Smolin (2007), The Trouble With Physics: The Rise of String Theory, the Fall of a Science, and What Comes Next, New York: Mariner Books, p. 355; http://leesmolin.com/writings/the-trouble-with-physics/