You are here: Home > A New Window on the World

Scientists are building better ways to look back into time. A discovery announced last week may be the most exciting thing in physics: a big black hole (called SDSS J0010+2802). It’s not just big; for its age it is a monster. It compels us to rethink our current concepts of the universe. How can we do that?

First the discovery. It’s a quasar (a radiation source that gets its power from a big black hole). Peering across 12.8 billion light years, astronomers see the quasar as it was 900 million years after the universe began. Already its black hole’s mass equals that of twelve-billion Suns. Current theory says this is 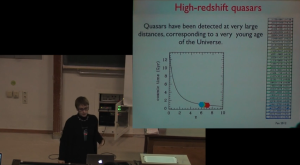 The typical analogy that I give is to find a child who is 180 cm tall but is still in kindergarten.

How can a quasar so luminous and a black hole so massive form so early in the history of the universe, at an era soon after the earliest stars and galaxies have just emerged?

The easy answer is: Big black holes predate the stars and galaxies. Current theory says this also is impossible. But could this too be true? Indeed, I think it is. How can this be?

Current theories portray an analog universe. That is, their space and time are said to be continuous. My recent book Time One explores a digital universe (a concept that goes back at least as far as Albert Einstein), one that begins with a single Planck-sized quantum (or fleck) of space that starts to replicate with the first tock of a Planck-time-quantum clock.  This quantum origin helps to explain many observations that seemed inexplicable. Now it will help us to make sense of the new infant big black hole.

Those same current theories start with all the energy and matter of the universe packed into a point. Time One’s universe begins with no energy and no matter. Its energy and particles are based on the preons posited by Australian physicist Sundance Bilson-Thompson and American physicist Lee Smolin. The energy and particles emerge from replicating space. They’re made of twists in the three 2-D links with neighbor flecks. This is a different kind of universe, something physics has lacked for a long time, an entire alternative ontology with wide consequences. For example, as German mathematician Bernhard Riemann foresaw in 1851, physics need not impose a metric on this kind of space; its metric is inherent. Time One shows how links between the replicating flecks make twists and tangles. Many of the twists can cancel out; Bilson-Thompson shows how such twists make photons. But lots of twists can’t cancel; he shows how they make all of the fundamental particles of matter.

In both digital and standard cosmologies, space inflates enormously in its first instants. In Time One’s digital cosmology, it inflates from 5×10-44 to 10-40 seconds as space-quanta twin each Planck-time tock until space loses its strong curvature. In standard cosmologies continuous space inflates from 10-36 to 10-32 seconds, started and stopped by artificial mathematical assumptions (which American physicist Paul Steinhardt, at first a proponent, says have failed).

So here’s the crux: Standard cosmologies can’t build that big black hole in time for us to see it. But in the digital cosmos, black holes are just knots in Nature’s knitting. They are the kind of thing one would expect to see right after the beginning.

So with an adjustment in our thinking there’s no sudden-black-hole problem. That monster black hole offers us a window into formative events. Overall one might embrace a phrase from Bilson-Thompson, ‘The significance of this model is its extreme economy and extension of earlier ideas.’