You are here: Home > Major sea-level rise is on the way and entire cities will be flooded.

Major sea-level rise is on the way and entire cities will be flooded.

The world’s last great ice sheet is in the process of collapsing. This is not about climate change. It is about gravity and unstable foundations. The West Antarctic Ice Sheet (WAIS) will raise North America’s sea levels ten feet when it goes. It will shift some shorelines inland many miles. A new study sets out to ask: When will this happen?

Likely you haven’t heard of WAIS. It’s the world’s best-kept open secret. Scientists are often not good at explaining science to the public. I’ve been there, done that. I try. More than two years ago I wrote about the coming death of WAIS. I have the small advantage of having been there.

Four British physicists first accurately calculated the complex consequences of the coming WAIS collapse in a 2009 paper in Science. It received scant attention. Compare that with the fuss last April over a story that the floating 200,000,000,000-ton Larson Ice Shelf ‘shattered like a windshield into thousands of icebergs, each larger than an aircraft carrier’. Like floating ice cubes melting in your drink the loss of Larson didn’t change sea levels at all. 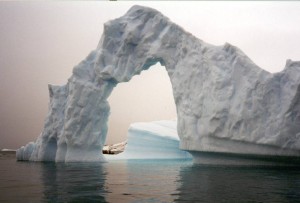 Now news in Science says scientists in the UK and USA will study the Thwaites Glacier—an ‘Oklahoma-sized’ piece of WAIS—to try to gauge when the WAIS will collapse. Good luck with that. The WAIS is more than 2,000,000,000,000,000 tons of ice. It is propped up high above the ocean on unstable ice foundations that are screened from melting by rotting ice shelves like the now-toast Larson.

Will the WAIS collapse in some smooth, slow way? Don’t bet the farm on it. Ice is tricky. Like the Larson it is prone to do the unexpected. Compare with a far simpler problem: Check out the arch of WAIS ice propped up on unstable ice foundations in the image. How and when does it come down? Though it is a mere 2,000 tons no one is able to predict its fall so we keep our Zodiacs—one seen through the arch—away.

To put things in perspective, the last 20,000 years saw all of Earth’s great ice sheets (except WAIS) collapse, raising sea levels about 400 feet. For the last 3,000 years WAIS was stable and so were sea levels. Now sea water’s eating its foundations. The time has come for it to go.

The 2009 Science paper shows how the resulting sea level rise will be uneven: the coast of the United States will get the biggest increase in the world. Entire cities will become uninhabitable. Coastal highways, rail lines and airports will become unusable and impact the economy. Shorelines will erode. What should be protected? Where should new construction go? How many will become refugees? We need to know what is coming and when.

The Thwaites Glacier study is no doubt a big improvement over doing nothing. Is it enough? The reason for studying the Thwaites is that it ‘is emerging as the epicenter of melt on the West Antarctic Ice Sheet.’ But the Thwaites Glacier, though huge, is just a tiny fraction of the WAIS. And the big problem is not glacier thinning; it is ice-sheet instability.

The new Science article cites one of the scientists as saying that she and her colleagues have a responsibility to the public to provide answers about the fate of West Antarctica. ‘This is a moral and social imperative,’ she is reported to have said. It’s not clear the proposed study can achieve this. Rather it is just the best the scientists can cobble together by committing ‘a huge amount’ of their existing resources.

The coming collapse of WAIS is everybody’s problem. So, as is so often the way, it is nobody’s problem. I said: Don’t bet the farm on a smooth, slow collapse. Yet that is exactly what we’re doing.

What else can we do?