You are here: Home > Up Close with Ebola

Up Close with Ebola

Around the world we’re starting to see same-old knee-jerk stuff. Irrational reactions to Ebola hurt us all: World Health Organization Director-General Margaret Chan says that 90 per cent of economic costs of an epidemic ‘come from irrational and disorganized efforts of the public to avoid infection.’ ‘Public’ includes public officials and push-button politicians and panicky people who push the buttons. Irrational reactions not only don’t reduce risks of infection, they may increase them. So let’s keep the conversation cool. Reactions based on so-called common sense assist the enemy: Ebola is uncommon, so it has no common sense. We need action based on evidence about what works. Evidence says these actions won’t work:

Stop Ebola, close the border [doesn’t work and makes risks worse].
Spot Ebola with thermometers at airports [misses most Ebola and spots lots of other bugs].
Fend off Ebola with a vaccine [too late for this epidemic, maybe useful for the next].
Cure Ebola with new high-tech treatments [ditto].

My post two weeks ago agreed we need overwhelming action on the ground and this is even more urgent now. Meantime, there’s news of practical action that could work: EBOLA SCHNELLTEST WIRD VALIDIERT says the website of a modest company in Weimar, Germany. That’s FAST EBOLA TEST IS VALIDATED [my translation here and throughout]. The company is Senova GmbH. It makes immunoassay systems―or, you could say, infection test kits. That is, they do what those thermometers at airports don’t do: They detect Ebola.

A local newspaper headlines writer Michael Helbing’s story: Weimar strip tests should detect Ebola in 10 minutes, with subhead: Rapid diagnosis could save many lives. You bet it could. Unlike those maybe-next-year treatments, these tests could soon transform the Ebola-epidemic game. Some who are infected don’t show symptoms and they later infect others. Some with symptoms don’t have Ebola but are isolated with those who do. A ten-minute test would have big implications – if it works. American science writer Gretchen Vogel says:

Rapid detection of infections would be a huge help in applying the tried-and-true methods that have contained every other Ebola outbreak so far: Identify and isolate infected people quickly. 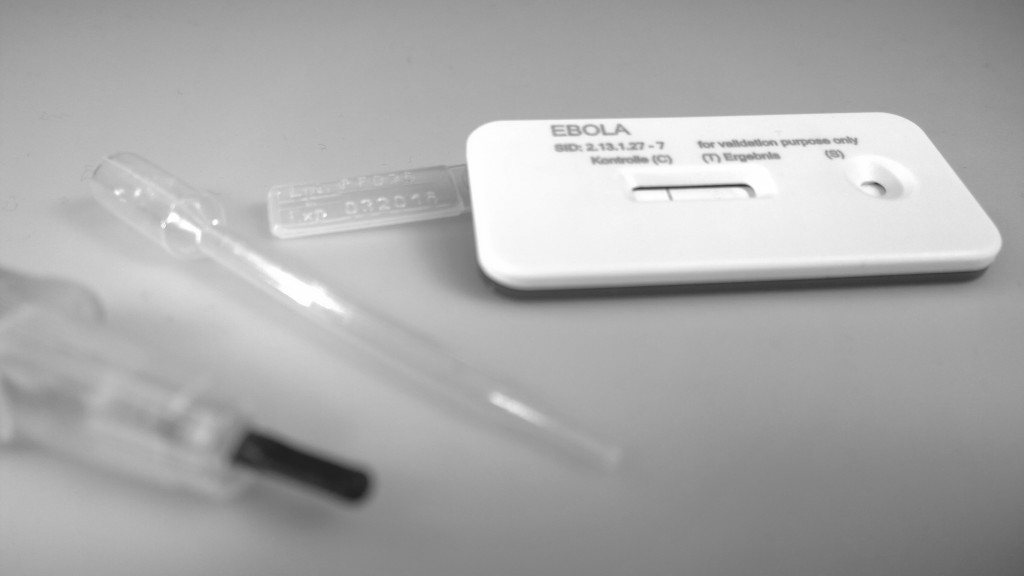 There is another test (the PCR test) for Ebola. It is reliable. But it needs a lab―infrastructure that’s thin on the ground in epidemic-stricken areas. In the field it takes ‘six to ten days to get results,’ Helbing reports. But with this new test in hand, two drops of blood―try not to hold your breath―and the answer’s on the strip: One line says you’re okay; two lines, you’re infected.

Helbing says Hans Söffing, owner of Senova, has his mind on the city of Guéckédouin Guinea, near the border with Liberia and Sierra Leone, ‘the epicenter of the Ebola epidemic’. Söffing’s realistic. The strip’s been tested at the Institute of Virology in Marburg so ‘there’s a very good chance that it works’ but ‘one gets this kind of thing into production only if it works with patients’. ‘Works with patients’ means that, in the field, test strips must finger most of those who are infected and flag few who are not. Now scientists from the Institute are in Guéckédou with ‘2,000 test strips in their luggage’. They are checking them against the PCR test. Senova should soon have results.

So, what action does evidence say will work? Boots on the ground. Suits and gloves at the front lines. Procedure to take suits off safely. And, just maybe, a 10-second test.