You are here: Home > A Breakthrough is Underway

A Breakthrough is Underway New physics will drive new technologies

Breakthroughs in physics drive the economy. Our economy could use new drive. Canadian Blackberry innovator Mike Lazaridis understands this. ‘We need a new discovery,’ he said a few years ago and gave $170M to endow the Perimeter Institute to study fundamental physics.

History offers examples. In 1687 Isaac Newton kicks off mechanics. It set the scene for the industrial revolution. In 1905 Albert Einstein published five ideas, starting five branches of physics that today underpin a large part of the world economy. For example, the photon led to quantum physics, taming things like electrons in atoms that are too small to see. Today quantum physics is the lifeblood of the Internet and high-tech industries like Google and Apple. 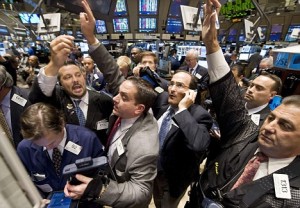 The world is on the brink of another breakthrough: a new plunge into even smaller things. The ancient Greeks imagined an indivisible particle and called it a-tom (meaning no-cut). In 1854 Bernhard Riemann, while founding space physics, said space made of tiny particles or quanta could make more sense than assuming space to be continuous. In 1899 Max Planck, while founding quantum physics, calculated the size of such quanta—far tinier than an atom. The size of a Planck-scale quantum compares to the period at the end of this sentence as that period’s size compares to the visible universe. In 1941 Albert Einstein said, ‘I tend more and more to the opinion that one cannot come further with a continuum theory.’ He was right. By 1956 he was saying to his friend Besso that, in a discontinuum, ‘… nothing will remain of my whole castle in the air … also nothing of the rest of contemporary physics.’ Six decades later his castle is showing signs of coming down. An assumed continuum still dominates most physics today. Here lies opportunity.

Physics is in hot pursuit of smaller sizes. We spend billions studying ever-smaller things by smashing particles at ever-higher energies. The Large Hadron Collider—the world’s biggest machine—is yielding no new ideas. No collider will ever generate the energies we would need to study Planck-scale physics. To make progress we need a different approach. Leading physicists are starting to agree.

Einstein made huge leaps with simple thought experiments, asking fundamental questions based on what we know. We might ask: If space is made of tiny quanta, what is matter? In 2008 Sundance Bilson-Thompson, an Australian physicist at the Perimeter Institute, showed by pure creative thinking how all known particles of matter may be made of twists at some sub-sub-sub-subatomic level. Twists of what? He doesn’t say. But the simplest answer is they’re twists between those quanta of space. Matter, in other words, may be made of space. This breakthrough could be the biggest since humans first made fire.

The breakthrough is proceeding slowly. We need to actively exploit it. With hard-learned skills and hard-won projects it’s natural to resist change and so the ramp-up of a new approach tends to take decades. If we can speed it up the economic payoff from Planck-scale physics could be quadrillions of dollars in world GDP. Here are two things we can do.

First we can build Planck-scale concepts into science education. Most successful entrepreneurs get their inspiration early. The pace at which new ideas reach high-school classes is so slow we may start teaching them in thirty or forty years. We can give science and technology students a huge head start. Science education has the benefit of helping create the new physics that can make a difference in the world economy just like Einstein’s new ideas did 100 years ago. Educators tend to teach what they were taught. Students who learn to think in Planck-scale terms before they get to university will push past the old-concept queue. Let’s develop Planck-scale educational materials for curious young minds.

Second, the media have key roles in public education. This breakthrough will impact everybody’s life. Let’s not underestimate the interest in deep ideas. The public appetite for science stories is huge. But Planck-scale conversations need a new vocabulary. We should give science journalists the tools they will need to confidently explore the next level of our world.

We have that new discovery. It can help to build a viable economy for future generations. We should foster it now.