You are here: Home > The Massive Question

The Massive Question The Higgs Boson Has No Answer

What is mass? An apple has it. Put one on a supermarket scale: Earth’s gravity guarantees you pay in precise proportion. In 1684 Isaac Newton does the math for mass and gravity. In 1915 Albert Einstein cleans it up. But a deep problem remains untouched: Up close and personal, neither Isaac nor Albert nor anyone after them can explain what mass really is!

Newton gives this his close attention. The First Law of Motion links mass to inertia: Mass changes its motion only when subjected to a force. So is mass a property of gravity or of motion?

In 1905 Einstein discovers special relativity. It reveals mass as being changed by motion: As a proton accelerates to near light-speed in the Large Hadron Collider its mass approaches infinity. If we leave the proton alone and accelerate you past it in a spaceship you see the proton’s mass increasing just the same. This seems to show mass as a form of energy. 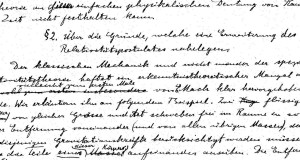 In 1915 Einstein seizes on the idea that inertial mass and gravitational mass are the selfsame thing. In a famous sentence in his famous paper (The Foundation of the General Theory of Relativity) he explains why we need general relativity (GR): ‘Classical mechanics, and no less the special relativity theory, has in principle a defect, which was perhaps first clearly pointed out by E. Mach.’

His paper is fascinating, not least because we can access the original manuscript, which he left to the Hebrew University of Jerusalem. In his many emendments we can see his mind at work. See him, for example, inserting the formal initial ‘E.’ for Ernst into his familiar reference to Mach by surname (as is then the German fashion between close friends).

A central issue for all three (Isaac, Ernst, Albert) is: What is inertia’s frame of reference? Mach thinks it is the entire mass of the universe, which he assumes is made of stars and gas in massless space. (Now we know that most of the mass of the universe is made of space.) Another odd aspect of this paper is that, while it says Mach’s Principle is why we need GR, GR is inconsistent with the Principle.

Many physicists had a hand in today’s theory, the Standard Model. It uses symmetries and quantum field theory (QFT) to derive properties of all the subatomic particles physics has found. Anyone who follows news should know the Large Hadron Collider (LHC) discovered the Higgs boson a few years ago and the Higgs explains why other particles have mass.

Well, actually, not! The LHC discovered a few fleeting products of proton collisions that so far match some properties expected for a Higgs. If further work supports its identity what does this mean? QFT says a Higgs field is imagined to exist with a non-zero value everywhere (see Fields of Dreams). This field infuses particles with mass; theory says without the field they would be massless.

Does this explain what mass is? Unhappily, the Standard Model and its fields rest on fuzzy foundations. Its math assumes space is continuous although it’s pretty clear that this is wrong. It has many arbitrary parameters. It needs a whole new set of so-called supersymmetric particles to prop up its math but the LHC finds no trace of them.

More recently Sundance Bilson-Thompson showed how all those Standard Model particles can be constructed using just two entities: a left-hand and a right-hand twist. Starting from the origin of the universe Time One shows how tiny quantized particles—string theory’s Calabi-Yau manifolds, or flecks—of space give rise to twists. This shows matter and energy at the Planck scale (a hundred-billion-billionth of the size of those protons) to be made of twists between flecks.