You are here: Home > The Supersymmetry Calamity

Sounds like a The Big Bang Theory episode. Maybe someday it will be. But even in the fields of physics, supersymmetry is esoteric. What is it? What is its calamity? Why should you care?

What it is is an idea: Particular superheroes! Here’s their story. 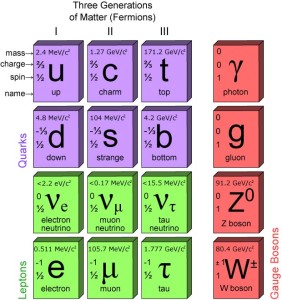 The Standard Model is the crown jewel of physics. It is a theory of subatomic particles and the forces that affect them. It has sixteen kinds of particles: six quarks, six leptons and four bosons. Lately, headlines tell us, add the Higgs. The Standard Model describes the world at the smallest scale physics has reached so far. With exquisite precision it calculates the results of smashing particles. But it explains nothing. Indeed it leads to unsolved mysteries like: Why does the universe not collapse into black holes? And: What is Dark Matter?

Some forty years ago, our particular superheroes came to the rescue. Imagine a comic-book world called superspace. A fourth dimension where each particle we have found has a partner-particle we haven’t found. Why a comic-book world? Well, so far the whole idea of supersymmetry is imaginary. Decades ago, the authors of Superspace (a serious text) said:

The most striking feature of the relation between supersymmetry and the observed world is the absence of any experimental evidence for the former in the latter.

It’s still true. Even so, for four decades physicists manipulated the math of superparticles to show how they solve Standard Model mysteries. Meanwhile they built the world’s biggest machine to find experimental evidence of superparticles. It’s a particle smasher (the Large Hadron Collider or LHC). After a shaky start it works. But now—as the musical says—there’s trouble in River City. Scanning many trillions of smashes, the LHC sees not a single superparticle! My quote-of-the-year award goes to American physicists Joseph Lykken and Maria Spiropolu:

The negative results are beginning to produce if not a full-blown crisis in particle physics, then at least a widespread panic. 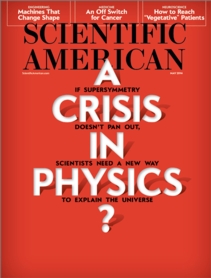 So here are my predictions for hot physics news in 2015: The LHC will work up to full power. It might find a superparticle. If so, the particle will get an ugly name that starts with s. Then physicists will hunt for other superparticles. They will want a bigger atom smasher costing multi-gigabucks. They will build a bigger Standard Model on a broader foundation. The main effect of finding superparticles on you and me will be our share of the cost. The effect on the world economy will be modest.

But what if the LHC works up to full power and finds no superparticles? No superheroes, so no rescue. The Standard Model’s shown to be the Standard Muddle, forty years of fundamental physics consigned to the comic books. Funds for smashing particles are soon in short supply. Physicists are driving cabs. The main effect of trillions of non-events on you and me will be: They will transform our world in coming decades. How so? Well, the world economy is getting sluggish. We need new physics. We will find new physics when old physics crumbles. New physics will create a new economy as inconceivable to us as smartphones, social media and googling were forty years ago. Spending all those gigabucks to show there are no superparticles will seem a bargain.

Which way will it be? What do you think? My bet: Old physics will crumble.