You are here: Home > How Does Teleporting Happen?

How Does Teleporting Happen?

Teleporting may be an everyday event throughout the universe. Physicists experimentally demonstrated it some time ago. Recently they set a new distance record: six kilometers. Sounds like progress. Problem is that nobody knows: How does it work? 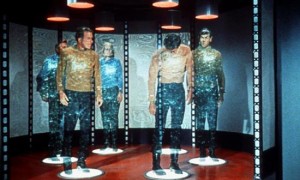 ‘Beam us up, Scotty’ are the magic words that Star Trek fans know make it happen. In Captain Kirk’s world it works like this. The particles—that is, the atoms and their sub-atomic-particle constituents—that constitute his body and give rise to his mind remain on Triskelion. However they lose all of the state properties that make them work as Kirk. Up on the Enterprise the transporter imprints those same state properties on a corresponding bunch of disordered matter (maybe what was left when he beamed down). Presto, Kirk is back on board without crossing the intervening space.

The report of the latest experiment differs from this in a few details. It happened on Earth (in Calgary, Canada), not in the far reaches of space. The two terminals A and B were only six kilometers apart, linked by fiber optic cable. A single photon (Albert Einstein’s particle of light) teleported instead of the far larger and more complex Kirk. And its relocation was far faster than the speed of light: indeed it was instantaneous, with none of that shimmering transition Star Trek fans have come to know and love.

Teleporting the first few inches years ago was a much bigger deal. What then is the take-home message from this latest test? Maybe it’s this: Teleporting is becoming ordinary; each new milestone is barely newsworthy; yet the problem is we still don’t know what’s going on.

At its root lies a much older problem known as action at a distance. It has a bad rep. As long ago as 1693, Isaac Newton said it was ‘so great an absurdity that I believe no man who has in philosophical matters a competent faculty of thinking can ever fall into it.’ Einstein called it a spooky concept and detested it.

Yet we now see this spooky action at a distance actually happens. Indeed it seems likely that far from being strange behavior this happens all over the universe all the time!

The central difficulty is there is no physical connection between points A and B. At least, so says Newton’s mechanical worldview. Einstein’s quantum physics fudges the issue, much against his wishes. Modern quantum field theory views each particle as an extended field. Big-time extended: the field of a particle at point A has a very small but definitely non-zero value not only at point B but throughout the entire universe. When an experiment makes a measurement, that particle we thought is at A can turn out to be anywhere. What’s a field? It’s nothing more than physics fudge.

So though quantum theory seems to say this is a non-local world, it does not have a physical connection between A and B. But a Planck-scale worldview does: Time One shows how the strange contradictions in modern physics can make sense. And it follows from this worldview that every Planck-scale quantum is directly and instantly connected to every single other one.

And, as a free bonus, the same worldview shows exactly where the universe came from.