You are here: Home > Exotic Not-Erotic Hadrons vs Gravitational Ripples

I’m taking time out from Pristina. Exotic hadrons are the rage this week. Suddenly a cipher, Z(4430), seems to be sexy.

What’s exotic? Well, not-exotic, plain-vanilla hadrons are particles of matter. They include baryons―the protons and neutrons that are stable in nuclei of atoms that we see, and unstable particles called mesons that fly unseen and soon turn into something else. Both baryons and mesons are made of quarks. Each baryon is made of three quarks; each meson’s made of two. They fit into a framework called the Standard Model (it’s the culminating triumph of a century of physics, yet some say it is ‘the Standard Muddle’). Exotic hadrons, also made of quarks, don’t fit into its threesome-twosome pattern. 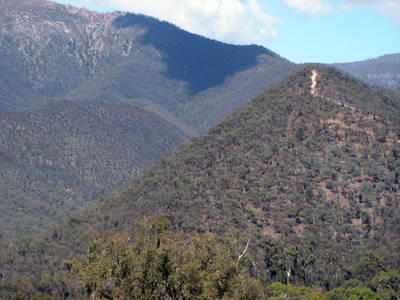 Exotic hadrons are old hat among particle physicists. Signs of them have been sighted, though less than clearly, for some years. The cause for new excitement is a wealth of data in support of one such SM-nonconformist (Z(4430), made of four quarks). Not to mention a well-written media release.

Now―not meaning to digress here―the Dargo High Plains is one of my favorite places. (Plains?? Well, those Aussies call a redhead ‘Blue’.) Ranchers looking for free grazing drove their cattle up there. Each rancher could imagine a fence around the cattle and then think of those outside the fence as ‘strays’. One must expect a few in high, wild places on the ‘plains’. And so it is with particles outside the equally imaginary Standard Muddle fence.

So I hope to see some sense of proportion in the news. On my scientific Richter scale, exotic-hadrons register, let’s say, a one-point-six. But what about the news that they are edging out? Ripples in the fabric of space, made in the first few gazikoseconds of the universe’s life, imprinted onto light let loose some 380,000 years later, now detected after 13.8 billion years. This scientific earthquake, in my view, registers at least a ten.

Simply, it’s the most important scientific observation of all time, past, present and future!

A large claim, I know; but consider: Until now, what happened in the beginning was only speculation and it seemed destined to stay that way forever. Worse yet: The only concept that comes close to describing it―cosmological inflation―is not close enough, rests on incredibly special initial conditions, and explains nothing. Now, suddenly, we see what happened from the beginning. And consider too that (as a reader of Time One discovers) what we see allows us to explain the quantum origins of space and time and all the laws of physics.

In the history of human understanding this ultimate insight will only ever happen once.