You are here: Home > Designer Genes Getting CRISPR and CRISPR

Designer Genes Getting CRISPR and CRISPR

Heads up! A new technology is transforming gene editing. It gets my vote for top science news of last year. It will affect us all more than we can imagine. And the most surprising news may be its inventor.

Many things can change the code of DNA. Chemicals, X-rays, ultraviolet, cosmic rays, and mistakes during cell replication can cause random mutations. Natural selection weeds out bad mistakes. Gene editing changes the code too but it is different. Somebody—the gene editor or whoever pays them—specifies the code they want.

Why should this be a big deal? Well, let’s take a quick look back at the road we’ve traveled. In 1961 we learned to read genetic code. At first it was very slow and prohibitively costly. Code-reading didn’t take off until gene sequencing became fast and cheap about ten years ago. Now it is moving from CSI to a hospital near you. Increasingly physicians use it in diagnosing and treating diseases. In gene therapy inserted DNA molecules give your cells a capability they otherwise don’t have. This may save your life. But it does not affect your descendants. Reading DNA took half a century from discovery to routine application. The world had time to think about the implications and to put some hasty rules in place.

That was gene reading; now we’re editing the genes—changing what is written in the code. In the last few years this technology has been taking baby steps. It is controversial. Gene editing can perform wonders. It can fix a defect in your DNA. Or it can (if we imagine that we are smart enough) make your good DNA even better. The most controversial aspect is this: It can edit genes in our reproductive cells (an egg rather than sperm would be the usual target). Designer creatures, including humans, are now possible in principle. How about we breed a sub-species of ten-foot Aryans? Until now the techniques have been expensive and difficult, slow and uncertain, and used in only a few specialized laboratories.

Now the genie is out of the bottle. Scientists have teamed up a kind of DNA called CRISPR with a protein, a 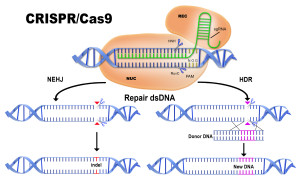 DNA-snipping enzyme called Cas9. This is one of three methods developed so far. Together with the tools most cells already have, the CRISPR/Cas9 team does a programmed cut-and-paste in DNA of any cell at any specified location. Suddenly gene editing is cheap and easy, fast and increasingly reliable. It’s not quite bathtub chemistry, but it is getting close.

It seems gene editing may go from discovery to application in only a few years. How did we get there so fast? The answer, as so often with major advances, is: Basic research got us here by accident.

A brilliant geneticist called Streptococcus pyogenes invented this technology. That’s right, a bacterium. Jonathan Swift wrote that ‘a flea hath smaller fleas that on him prey’. Well, bugs have smaller bugs. Ten entire families of viruses called phages are known to infect bacteria. The bacteria fight back. S. pyogenes evolved (or picked up in its travels) a neat way to hack a phage’s DNA and so render it harmless. It’s called adaptive immunity. Scientists studying S. pyogenes stumbled on its trick. Now anyone can buy it in a bottle. Take out your credit card. Reputable firms claim they are ‘making genome editing accessible to anyone at any level.’

What will be the long-term outcome of all this? I suggest you should be skeptical of anyone who says that they know.

CRISPR technology seems a clear-cut case of: Just because we can doesn’t mean we should. But you can bet on it that someone will.