You are here: Home > Clues > The Problem of the Three Dimensions

The Problem of the Three Dimensions 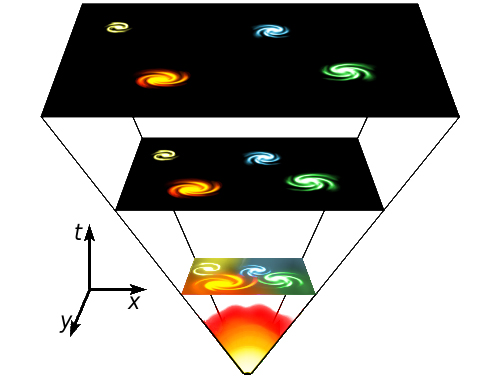 That everywhere space … has three dimensions, and that space cannot in general have more, is based on the proposition that not more than three lines can intersect at right angles in one point.

The number of space dimensions may be the most fundamental thing about the universe. We see three. Reichenbach says rightly any other number would make this a useless place. The Problem is: Why three? Why not four or two or seven? Why any at all? Where do they come from, so to speak?

Kant calls on gravity in aid of explanation: The force between two bodies, Newton says, decreases with the inverse square of separation. The inverse-square law, Kant says, leads to three dimensions. Barrow says Kant has this backwards; three dimensions lead to Newton’s law.

A hundred or so years ago a book took a satiric look at life in two dimensions. Little more has surfaced since. We still see three. We still have nothing more to say about the reason. Physics plays with more dimensions. Some string theories need nine. In addition to the three we see there are, they say, six more dimensions all curled up so tightly they’re impossible to find.

But aside from these dimensional digressions this clue is in view for all to see: Why three?