You are here: Home > Clues > The Observer Problem 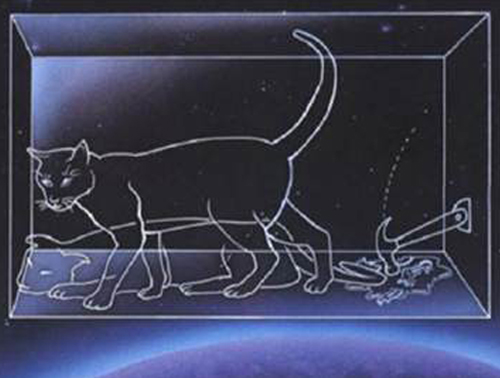 The problem is that quantum mechanics is fundamentally about ‘observations’. It necessarily divides the world into two parts, a part which is observed and a part which does the observing.

QM predicts average results of an experiment that’s performed many times. Like flip a coin a million times and it will fall half heads, half tails. But there’s a difference between coin-tossing and QM. The tosser has the coin. He holds it. He sees how it works. QM just says the flipping numbers come out half and half. It says that there is nothing more than numbers. It’s as though one gets coin-toss results but there’s no coin. QM’s universe is made of little pieces. Each is made of numbers kept by an observer of experiments and nothing else.

In coin-tossing there’s the coin and there’s the tosser who must tally heads and tails. Along these lines QM splits the universe in two. There’s the quantum part that’s under study and there’s all the rest. Bell asks, ‘When the ‘system’ in question is the whole world where is the measurer to be found?’

Thus the Observer Problem is confusion that arises trying to apply QM to the whole universe.

The Mystery of the Missing Bang
The Problem of Antimatter