You are here: Home > Clues > The Boundary Problem 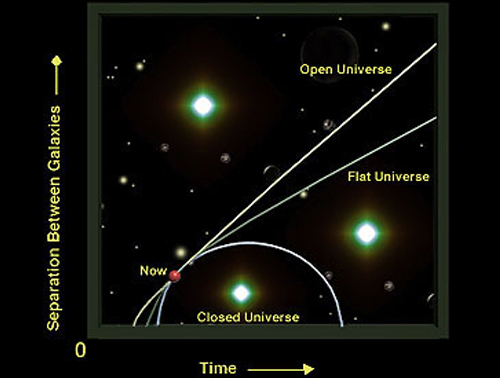 [I]t will be seen that I have not succeeded in formulating boundary conditions for spatial infinity. Nevertheless, there is still a possible way out …. For if it were possible to regard the universe as a continuum which is finite (closed) with respect to its spatial dimensions, we should have no need at all of any such boundary conditions.

What does the edge of the universe look like? In 1917, two years after general relativity burst upon the scene, Einstein published a paper that converted cosmology into a science. He asked himself about the universe’s edge and found that everything depends upon the edge―if there is an edge. And depends upon its absence if there isn’t. First he took a look at Newton’s universe. Newton said the universe holds all the matter in a large but finite zone. This hangs in an infinite and empty space. Einstein showed that if there is no matter at infinity there is no matter anywhere. In other words, he showed that Newton’s universe is wrong. This confronted him with the question of the edge. He showed that if there is an edge this too leads to a contradiction. But how can there be no edge?

Six or seven hundred years ago people thought the world is flat. If you sailed too far you would fall off. Bold sailors went to see this for themselves. No edge. It was soon seen that if one kept on going on Earth’s 2-D surface one came back to where one left. This helped Einstein think about the boundary of space. To make sense the universe must have a finite size. He saw it as a 3-D analogue of the Earth’s 2-D surface. His universe is finite; it’s closed in on itself. He needed no spatial boundary conditions to plug into his equations; there is no boundary in space. Einstein gave little thought to whether there’s a boundary―an edge of sorts―in time. But GR’s equations say there must be one―in the beginning. Much later, Hartle and Hawking came up with a way to tweak the math to get rid of the GR edge in time. They did it by assuming time was then the same as space, whatever that was. It’s a trick that explains nothing.

So: No boundary in space and one (or maybe two) in time. How does no boundary begin?

The Background Problem
The Coincidence Problem