You are here: Home > Clues > The Horizon Problem 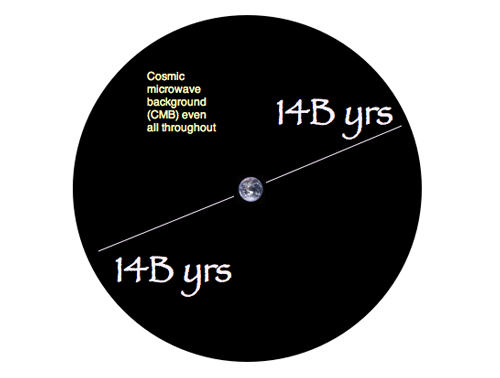 The impossibility of the causal communication that would be required for thermalization, in the standard model, is referred to as the horizon problem.

The 1978 Nobel Prize for physics was awarded to the discoverers of the cosmic background radiation, the remnant of light let loose when general relativity says the universe was only a few hundred thousand years old. Satellites soon took the Big Flash picture in all directions. It shows large-scale structure in the early universe. It has hotter, denser zones and colder, less dense zones. But there’s a stunning message coded in its artificial colors. The difference between the red and blue, between the coldest and the hottest places in the universe, is no more than ten parts in a million. If 3,000ºC was average, the hot spot was 3,000.02ºC and the coldest was 2,999.98ºC.

The picture shows that temperatures in the early universe were far too uniform. The technical description is: Close to thermal equilibrium. This condition happens in small systems over time. But in the early universe it is impossible! Looking east and looking west―or any two directions―one sees two places that are as far away as light can travel since the Big Bang. So each must be beyond the other one’s horizon (using that term in its cosmologic sense). The Horizon Problem is: How could thermal equilibrium have spread throughout the universe far faster than the speed of light?

The Flatness Problem
The Lumps Problem