You are here: Home > Clues > The Lumps Problem 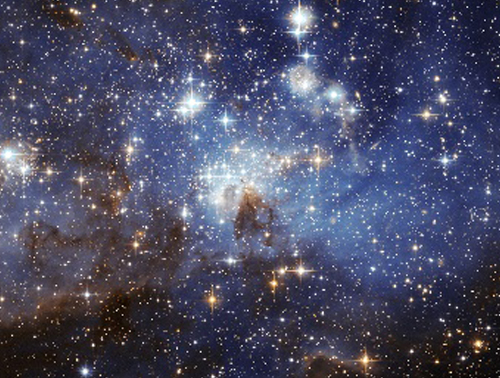 All one can say is that if the Universe was originally uniform then the small irregularities that arise from statistical fluctuations would not develop into galaxies in the time available.

The Big Flash picture of the cosmic microwave background radiation shows the early universe was smooth as butta but today it has great clusterings of galaxies with giant gaps between. Theory says it got this way with gravity. The tiny variations shown in the Big Flash picture were unstable. Anywhere that was a fraction denser had a bit more gravity so there it grew. But what made those variations? As Sciama says, simple random lumps would have been far too small. Computer simulations say there must have been a source of lumping in the very early universe.

Thanks to lumpiness we see not only galaxies but clumps of thousands of them―superclusters―with vast voids between. There are millions of these superclusters in the universe that telescopes detect. How did they get there? Over almost fourteen billion years, gravity made mountains from the molehills of the Big Flash lumps. At first slowly on a many-millions-of-years time-scale, then faster, the denser parts attracted more matter than parts that were less dense.

The computer models say that with a bit more lumpiness the light show would have gone out long ago. A bit less lumpiness and there would never be a show at all. The Big Flash picture’s lumpiness is perfect. Rerun the universe with a change up or down and there will be no Milky Way. No Sol. No Earth. What made the perfect lumps?

The Horizon Problem
The Measurement Problem