You are here: Home > Clues > The Flatness Problem 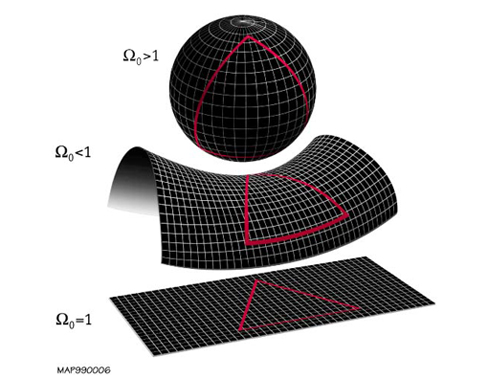 One of the most puzzling properties of our universe is that it is now expanding at a rate very close to the critical divide separating the ever-expanding universes from the recollapsing ones. It is a puzzle because as the universe expands it tends to deviate steadily from the critical divide because of the attractive force of gravity. In order that we be as close to the divide as is observed today, the universe must have begun expanding extraordinarily close to the divide originally.

There’s another kind of surface curve. It’s like a saddle. It curves up fore-and-aft and down side-to-side or vice versa. This curvature’s called negative. In between the two kinds there is zero curvature. This is called flat. The question is then: What’s the universe’s curvature? Is it positive or negative; or is it flat?

Measurements show that the universe is flat to a degree that seems to make no sense. It’s like a pencil balanced on its point for 13 billion years without a wobble. Why is the universe so close to flat? Something must have made it flat way back. But what?

The Direction of Time
The Horizon Problem