You are here: Home > Clues > The Coincidence Problem 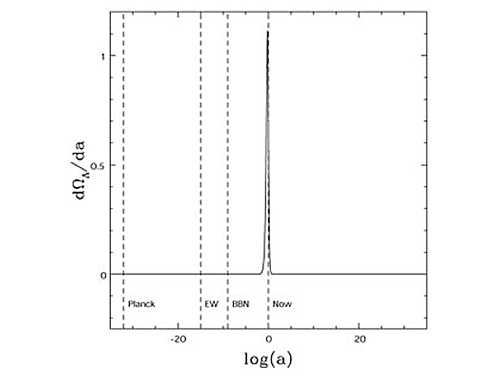 Separating the important clues from the misleading coincidences is at the heart of scientific creativity.

Sean Carroll has remarked on the remarkable coincidence that today’s universe is equal parts energy and matter. That is, matter and vacuum energy densities are approximately equal to each other. As he puts it: “At early times the vacuum energy was negligible in comparison to matter and radiation, while at late times matter and radiation are negligible. There is only a brief epoch of the universe’s history during which it would be possible to witness the transition from domination by one type of component to another. … It seems remarkable that we live during the short transitional period between these two eras.”

But why should this be? Someone may turn to that all-purpose pseudo-explanation, the Anthropic Principle: The world seems to have been designed for our benefit because only in such a world could we come to be. Carroll says this is ‘by no means an economical solution.’ It  seems that Carroll’s Problem’s no coincidence.

There is another take on the timing of this: Why does this transition happen as expansion of the universe is speeding up? This too, could be coincidence. But it looks like a clue.

The Boundary Problem
The Curse of Continuity