You are here: Home > Clues > The Atomic Matrioshka Problem 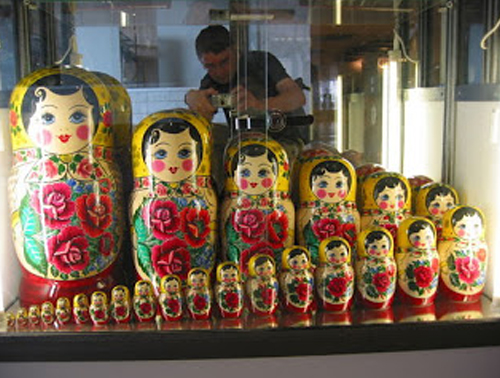 [I]t has been demonstrated repeatedly that the differences between supposedly fundamental particles are, in fact, merely consequences of the composite structure of underlying reality. … The difficulty is that, as such a process does not have an end, we can continue to suppose that below the currently understood structure is another set of more fundamental particles.

Gifts of matrioshka, nested wooden dolls, most often seven of them, are traditional in Russia. When one gets the gift one doesn’t know how many dolls will be revealed until the last comes into view. So too with the atom.

Around 400 BCE the Greeks came up with the idea (though maybe Jains in India were sooner) that when cutting matter into pieces there must be an end. That is, matter’s made of little pieces that cannot be cut. To the Greeks atomos means uncuttable. Around 1800 Dalton breathes life into this concept when he shows that elements react as if they’re made of atoms. For a hundred years they are seen as the basic building blocks of matter.

By 1900 physicists had cut the atom into a positively charged nucleus and a negative electron cloud. The nucleus is very small and each electron seems to have no size at all. The rest of the seeming-solid atom is just empty. Soon cutters cut the nuclei into smaller pieces they call nucleons―protons, which are positive, and neutrons, which appear to bear no charge. Some wonder: Are nucleons the long-sought basic building blocks or can these too be cut? By the 1970s it’s clear the proton and the neutron are composed of quarks.

If atoms are street level, quarks are in the sub-sub-basement. The Standard Model elegantly orders them with all the other particles. Surely quarks must be the atoms Democritus had in mind. But then Pati and Salam propose that all the quarks are made of preons, warning that the preons may be composites of pre-preons, and pre-preons of pre-pre-preons. Are preons real? Are they uncuttable? Will there ever be a final cut?

The Zeros and Infinities
The Background Problem