You are here: Home > An amazing birthday present: a universe that allows time travel and helps us understand our existence

An amazing birthday present: a universe that allows time travel and helps us understand our existence

Gödel is widely regarded as the world’s greatest logician. Albert Einstein, the greatest physicist, was his best friend. For years they walked home from the Princeton Institute for Advanced Study almost every day. The present—for Einstein’s 70th birthday—dealt with the nature of time. Our sense of personal existence is tied up with our experience of the passage of time. But physics cannot explain what time is. 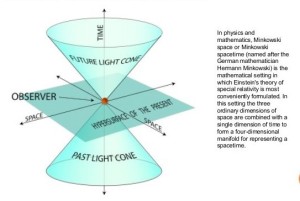 Studying relativity’s equations, Gödel found a solution for a rotating universe. That doesn’t mean our universe rotates, or that it contains the extreme mass distribution his universe requires. But it does mean that such a universe is consistent with the theory that describes most precisely the events we see in space and time.

The stunning aspect of Gödel’s discovery is that his universe contains closed-loop time-like paths. In this universe a fast spaceship can set off into the future and take you to meet your great-grandmother when she was a child.

This strange discovery garnered little attention, mostly focused on the possibility of time travel. Though Einstein worried about this too for a while, it wasn’t the real point. Gödel wasn’t saying we can travel through time in our universe, but rather that what we think of as time—flowing from the past through the present into the future—does not in fact exist in any universe described by Einstein’s equations, as ours appears to be.

Put another way, relativity’s spacetime is essentially a space; it has no quality we would regard as time.

If we accept Einstein’s theory as describing reality, Gödel’s gift shows us time isn’t what we think it is.

Physics gave Gödel’s remarkable work scant attention then and since. Two physicists wrote a paper arguing that he had made an error. This is still widely accepted even though it was soon shown to be wrong. 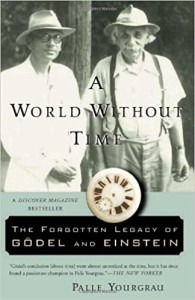 In his 2005 book, A World Without Time: The Forgotten Legacy of Gödel and Einstein, American philosopher Palle Yourgrau calls Gödel’s gift ‘a bomb … lobbed into the foundations of physics.’ The response, he says, was that ‘A conspiracy of silence descended on the Einstein-Gödel friendship and its scientific consequences.’

Today, some physicists are wrestling anew with time. Cosmological observations (and my own work on what happened before the Big Bang) depict the universe as three-dimensional, a pure space that renews itself and so has motion—but no time. Gödel’s theoretical view, still almost entirely unacknowledged, is creeping in through physics’ observational backdoor.

Contrary to Minkowski’s spacetime paradigm the universe has neither past nor future and at the Planck scale is not continuous but granular. It constantly renews itself through foliation and so changes. Change is expressed as motion. We see motion; our minds record it; we invent time (and clocks) to quantify it. It seems that we see change over time but isn’t so.

This gives us a new view of reality. The 3D universe we see—space, matter and energy—foliates itself timelessly at the Planck scale. Each foliation simply succeeds the last one. It is not one Planck time later; it is simply next. After almost fourteen billion years of time as we now invent it, our 3D selves exist in the instant universe and start to understand it.