You are here: Home > Until recently our cosmic neighborhood was growing faster than the speed of light. Now it’s run into a roadblock.

Until recently our cosmic neighborhood was growing faster than the speed of light. Now it’s run into a roadblock.

“From a physical point of view everything that is outside our neighborhood is pure extrapolation.”
– Willem de Sitter (1932)

Physics is coming up against two fundamental limits: It can never observe the biggest and the smallest things that it needs to study. Some seem satisfied this is the end of our search for ultimate answers; but they shouldn’t be. Instead, physics may come to value explanation rather than prediction.

The universe is the biggest thing physics must deal with. Over the years, we have assigned it a size based on what we can see—what de Sitter called our neighborhood. As we see farther our neighborhood grows larger. 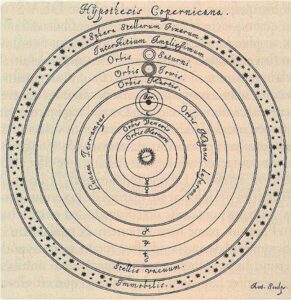 In 1530, Nicolaus Copernicus placed the Sun at the center of the Solar System, an idea that transformed human thinking. Stars were vaguely thought to lie in a shell just beyond. The size of our cosmic neighborhood was a few light hours.

By 1610 Galileo Galilei used a newly invented telescope to show that there are many stars not visible to the naked eye. The size of our cosmic neighborhood grew to some 20,000 light years. Already it was growing hundreds of times faster than the speed of light.

In 1750, with better telescopes, Thomas Wright said the stars we see comprise a rotating galaxy stabilized by its own gravity: the Milky Way. Almost overnight our cosmic neighborhood grew to 200,000 light years.

In 1931 paper, Albert Einstein kicked off cosmology—the study of the entire universe. He speculated how big the universe might be. By then the universe that could be seen with telescopes seemed vast beyond imagining, maybe even infinite, though he concluded otherwise.

COBE showed details (since explored in more precise detail) of our new neighborhood from almost 14 billion years ago. They lie close to the farthest edge of all that we can see. It’s no longer a matter of a better telescope: seeing that far into space is seeing light that left right after the Big Bang. We have reason to think the universe is larger than what we can see. But we can’t see further; light can’t come from further back in time than the beginning of the universe.

Something subtle has been happening to us as our neighborhood gets bigger. As we reached up to larger scales, our observations went from naked eyes to telescopes to satellites and are now handed to us by computers. Increasingly they are not direct observations but derived data that depend on theories to imbue them with meaning.

The same kind of thing is happening to us at the very smallest scale. As we reached down to smaller scales, our observations went from naked eyes to microscopes to atom smashers like the Large Hadron Collider and are now handed to us by computers. Just as there is a largest size, there is a smallest: Theory suggests there’s nothing smaller than Planck scale, which, being far smaller than an atom, is inaccessible even to indirect observations.

Purists cling to the established scientific process: Observations give rise to theories; theories lead to predictions that are tested by more observations. This won’t work with theories that reach beyond the bounds of observations. Are we now up against two impenetrable barriers to science?

Science confronts a choice: Give up searching for science of the whole universe and of its smallest constituents; or find a new way to explore these realms.

We already have vast amounts of data that demand explanation. More pour in every day.

For these reasons, I think fundamental physics will focus more on explanation and less on prediction. We may see a renaissance of metaphysics driving new physics after almost a hundred years in which it was derided by the (long-since discredited) philosophy of logical positivism.

This could be very good for physics.