You are here: Home > A new look at the tiny photon answers some vexing questions and offers a big opportunity.

A new look at the tiny photon answers some vexing questions and offers a big opportunity.

Albert Einstein introduced the photon to the world more than 100 years ago. Though physicists doubted—even ridiculed—his idea for years, it set off a scientific revolution. The photon now underpins foundations of the world economy. Yet to this day it is a mystery.

Even when we know a photon has gone from A to B we cannot describe its path. Quantum mechanics says don’t ask. Its Copenhagen version says there’s nothing there to ask about. QM’s success in calculating exactly what these “nothings” do seems to lend authority to this philosophy. It leaves us with little more than doggerel: ‘We seek him here, we seek him there … that demmed, elusive Pimpernel.’

In the Standard Model (aka the Standard Muddle), the photon is a fundamental particle. It has known properties. For example it has a size: its wavelength, when it is regarded as a wave rather than a particle. It has a direction, known as polarization, at right angles to its motion. And it has a specific speed, the speed of light in a vacuum (though why it insists on having a speed—and why its speed has the value that it has—just add to its mystery).

No wonder that for fifty years Einstein believed there is some hidden reality behind quantum mechanics. Yet his approach, a so-called hidden variable, seems to have been conclusively disproven by modern experiments.

An alternative approach is to ask: Can the photon be dissected into smaller pieces? Though he would never have thought of such a dissection Einstein laid a foundation for it with his little-known discovery that space is not an extended nothing; rather it is a massive something. And by showing that there is a smallest piece of space, Einstein’s mentor Max Planck laid a foundation for us to ask a related question: What is space made of? 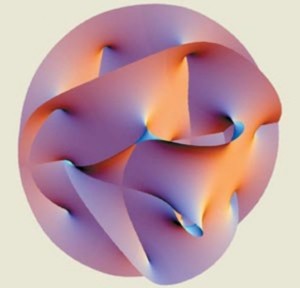 These days string theorists study math that makes sense if the answer is: Space is made of tiny flecks called Calabi-Yau manifolds. Each has six space-like “internal” dimensions. Six dimensions seem strange but it makes their math work. Being unconcerned about reality, string theorists mostly think nothing of it. From the “outside” each has a tiny Planck-sized volume, which corresponds to three space-like dimensions. And 3D is what we see.

Time One explores the relationship between one fleck and a next neighbour. It has two dimensions, which one can view as an interfacing window or as a linking ribbon. (Of course at Planck scale where there’s nothing smaller than a single fleck of space both of these analogies are wrong.) 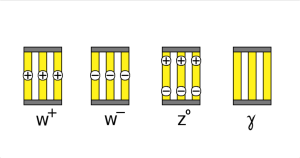 This is where the recent work of Sundance Bilson-Thompson offers a Planck-scale dissection of the photon. He shows how all the known subatomic particles can be made by braiding three twisted ribbons. His photon or γ is the simplest braid of all—a no-braid, in fact, made of three zero-net-twist ribbons. Or, as Bilson-Thompson would say, six Tweedles with each twisty Tweedledum twinned with its mirror image Tweedledee. To see the beauty of it all you really need to read him.

One might say the biggest problem we are left with is they are far too small to have (as Alice surmised) “TWEEDLE” marked at the back of the collar. In other words, Planck-scale space lacks places and sports no labels. Thus one can say (and I do say): The fact is the photon consists not in the location but in the relation of its Tweedles. 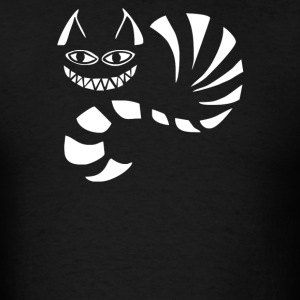 Now that we can peer into the photon’s innards we understand why Einstein was wrong when he insisted that a photon has a definite position and velocity. Maybe we can see too why a photon seems to vanish when we try to pin it down. This is a bit like Alice almost getting to mental grips with that Cheshire cat in Lewis Carroll’s first philosophic tale; in the end even its grin vanishes.

To this day most physicists are so deeply invested in the math of continuous space and the now-plainly false idea that it is just a vacuum, they fail to connect with now-well established aspects of reality. But then modern physics says that physics is not supposed to be about reality (and I say, as Einstein showed, this is wrong).

We need this to change. It could be that physics will continue to progress one funeral at a time (as Max Planck said). Or maybe we who stand to benefit from progress will find a way to say to physicists: Get with it!