Two weeks ago we took a look at a question from systems engineer Muralidharan Thiyagarajan. Referring to the observation that space everywhere is expanding, he asks: ‘What creates the space?’ My answer is: At the Planck level (named for German physicist Max Planck who first described it) where space is made of incredibly tiny quanta, space makes more space, quantum by quantum. Let’s take his question back to the beginning. This change of perspective leads to a radical rethinking of our understanding of the universe. It can solve deep and perplexing problems of cosmology. And also help you pay the bills. 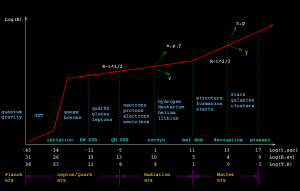 The standard model of cosmology conceives of energy and momentum as the drivers of our universe. The simplistic Big Bang concept has the universe defying gravity to fly apart now because it was flying apart before. In other words its mass has momentum. How did it get to be flying apart in the first place? Well, it began as an infinitely dense and infinitely hot singularity, a point of zero size. This point was not in space, it was space. How did it get to be infinitely dense and infinitely hot, or even to exist at all? The standard cosmology offers no answer to this question. Indeed few believe it. In desperation some serious physicists conjure up a universe before ours, one that collapsed under its own weight, for which there is not and cannot ever be any empirical evidence.

Recent evidence that the expansion is accelerating complicates this standard model. Most physicists now patch it up by imagining a vast new antigravity force, usually called Dark Energy. To work, this force must become bigger as the universe expands. It is negligible in the beginning so it can’t get expansion going. Thus we are stuck with at least two kinds of expansion, neither of which makes much sense. Many physicists also think a strange mathematical ‘inflation’ must have cut in briefly at 10-36 second; but though they try hard they cannot make it work. The whole thing is like a Rube Goldberg device that needs so many arbitrary assumptions it is hard to keep track of them all. As Canadian cosmologist Daryl Janzen points out, a single reason for expansion might be a better way to get the cosmic toothpaste on the universe’s brush.

My answer to Muralidharan’s question makes a single reason easy. Counting backwards, in the beginning the universe had just a single quantum. What properties does this quantum need in order to produce our universe? In Time One I show how three simple assumptions can do the job:

These are far simpler and fewer assumptions than those of the standard model and its variants. And they do indeed deliver a single reason for space expanding: the increasing number of quanta (or flecks) of space.

This concept explains many puzzles. It needs no space and no mass in the beginning: it readily gives rise to both the space and the matter of the initial universe in the first 10-42 second. It yields the enduring fundamental 3-D cosmic present that Janzen shows relativistic cosmology requires. It provides a physical basis for all the sub-atomic entities of the Standard Model of particle physics. It explains time and the velocity of light and why there are three space dimensions. It shows (and this would make Sir Roger Penrose happy) that the unfolding of the universe is driven, not by assumptions about Big-Bang energy, but by the low entropy of the beginning. No bang need apply. We can even see how all the laws of physics must arise. If you don’t like my assumptions, do you have a simpler or a better explanation for these puzzles?

American space physicist David Miller points out that, as a bonus, ‘this concept eliminates the currently accepted need to postulate a previously unimagined and mysterious dark energy to explain the acceleration of the expansion.’

This concept points a path to the new Planck-scale physics we all need. It offers a basis for a new scientific revolution, one which I predict will yield the biggest boost to the economy the world has ever seen.