You are here: Home > Making Space

Precise measurements say the universe is expanding. The measurements don’t show new matter. They show new space. This leaves those who think of space as empty with a conceptual puzzle. As cosmologist Marcus Chown once said, ‘How can nothing expand?’

Muralidharan Thiyagarajan, who is a systems engineer with Infosys in Chennai, has another way to look at it. He asks, ‘I always wonder what’s creating the space? I can’t accept that space is empty….’

To take his second point first, he’s right. We know space is not empty. Unfortunately many physicists never learn this. As far back as 1920, in a little-known lecture at the University of Leiden, Albert Einstein said space is something—not nothing—as a necessary consequence of general relativity. He called it the “Ether”. (Yet he is often wrongly cited as having deep-sixed the ether!) And in 1917 he accidentally embraced space expanding with his Cosmological Constant. These days cosmologists call it “Dark Energy”.

The labels don’t add much to the discussion. What we know is: Space is expanding; and that something is more than two-thirds of the mass of the universe. Physics does not say what this massive something is. Nor why it is expanding.

In another little-known paper, the “father of the Big Bang”, Belgian cosmologist Georges Lemaître proposed the universe originated in a single unique quantum. Today physics uses his math but neglects his concept. He thought of it as a quantum of energy. We have reason to see it as a quantum of space.

Indeed physics has a candidate at hand: it’s often called a Calabi-Yau manifold (I call it a fleck). It has six curled-up dimensions and is the darling of string theory. Its volume (the Planck volume) is some 1073 times smaller than a hydrogen atom. Thus there are now a lot of them, to say the least. One of the deep mysteries of string theory is why and how and when those six dimensions ‘compactified’ to Planck-size (as Oskar Klein first proposed in 1926).

If the universe began as one quantum of space, how can it create more space? The answer seems self-evident: It adds a second quantum. This brings us back to Muralidharan’s question. What could create it? By Lemaître’s hypothesis, the only thing that exists is the first quantum so it must do the creating. It is about as simple a concept as can be imagined: Space creates space, quantum by quantum. How? In Time One I suggest space quanta can tunnel from the state of oneness to the state of twoness. Indeed (I say) when the first one did this trick this was the first tick of time. Its progeny created space and (in regions of extreme curvature or gravity) are still doing it.

Some may see this as a tad far-fetched or at least unconventional. In fact this explanation brings together three more or less conventional components:

If you don’t like my three-part combo, can you offer a better (or any) explanation?

This explanation has many virtues. First it is an explanation, which we have long lacked. It solves the Klein compactification mystery: the manifolds were tiny from the beginning. Indeed it solves many vexatious mysteries like what is Dark Energy, what is Dark Matter, and what caused and stopped inflation. Time One tackles forty-six of them.

One is worth special mention. Where did all the matter come from? The conventional model packs all that mass into an 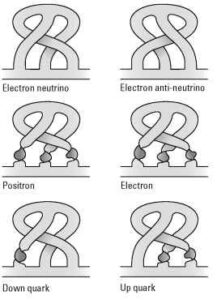 infinitely dense point, but few believe this. In 2008, Australian topologist Sundance Bilson-Thompson showed how all of the particles that matter and energy are made of can arise from simple relationships. He calls them twists and braids. Twists, I suggest, between next-neighbor space quanta. As he says of his work: ‘The significance of this model is its extreme economy and extension of earlier ideas.’ For me the significance is: in the beginning there was neither mass nor energy; it all came from topology.

American physicist Lee Smolin is Bilson-Thompson’s mentor and leading advocate of relational physics. In The Singular Universe and the Reality of Time he and co-author Roberto Unger advocate studying the universe as a single entity. Lemaître’s work, which actually did this, barely gets a mention. At one point, Smolin says: ‘Not every property can be a relation – there must be intrinsic properties which the relations relate.’

Well, actually there’s only one intrinsic property—the space quantum—and it is right under his nose.