You are here: Home > Polishing an Anticancer Apple

Here’s a great DNA-detective story. It involves gene surgery in plants that will soon be saving lives. And it has a surprise ending. 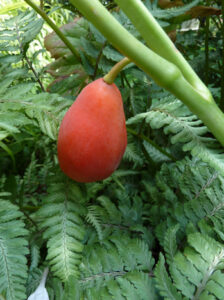 Many people owe their lives to the humble Himalayan mayapple. Its leaves contain a substance (podophyllotoxin) that inhibits cell growth. Would be great for stopping cancer but it is too toxic. However, we manufacture a less toxic substance (etoposide) from it. Oncologists use etoposide to kill dividing cells of many kinds of cancers. But mayapple grows slowly, often just one leaf per plant per year; so harvesting it to make the drug is not sustainable. So some scientists at Stanford University set out to find a new way to make podophyllotoxin.

Dr. Elizabeth Sattely is a chemical engineer. She leads what looks like a gung-ho gang of students who persuade plants to make more useful substances. By which short phrase I mean more useful, and more substances, and more of some of them. She and chem-eng grad student Warren Lau set out to find the mayapple genes that code for enzymes that make podophyllotoxin. The mayapple genome has not been sequenced. It is larger than the human genome. How to find the small bits of it they are seeking? No easy task, it is like finding an unknown number of non-descript straws in a big haystack. Their key insight: Make them reveal themselves! 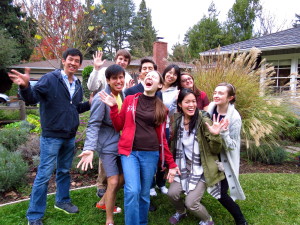 Many plants produce toxins as a defence mechanism. So when a bug chomps on a mayapple leaf we might expect the leaf to produce podophyllotoxin. Our chem-eng detectives had a bright idea: They mashed mayapple leaves. More precisely, after cutting each leaf from the stem, it ‘was then immediately wounded by piercing the leaf approximately a hundred times with fine tweezers throughout the entire surface of the leaf.’ Then they looked for RNAs (nucleic acids that transcribe genes to make proteins) that showed up in the wounded leaves; they chose those whose gene coded for the right kind of enzyme. Finally they transferred these genes into tobacco plants and analyzed the chemicals that they produced.

This is where their search took an unexpected turn. Tobacco leaves with six of the new-found genes and four already-known genes made a new product with a longer name (it’s a desmethylepipodophyllotoxin). Surprise: We can make etoposide with this new product more easily than we can with podophyllotoxin!

So let’s survey the rich haul we all stand to gain from their research. First, we now have a way to make a proven anti-cancer drug, etoposide, a way that doesn’t strip leaves from the wild and sometimes rare mayapple but instead uses a cultivated plant, tobacco. Second, this could cut costs. Third, their canny research method may simplify new searches for genes in plants that make other useful chemicals. And last but not least, this can lead to new plant-made chemicals.