1900. A hundred years ago this revolution held huge promise. Now historians of science call it the Unfinished Revolution. What went wrong? It is a strange but, in the end, illuminating five-part story.

Part One: In 1851 mathematician Bernhard Riemann lays the foundation for geometries in multiple-dimensioned spaces. (Don’t worry, we won’t check his math.) He writes about two kinds of spaces—discrete and continuous. At small scales discrete spaces are made of little pieces (let’s call them flecks). Continuous spaces are smooth at any scale, no matter how small. Riemann noted if you choose to use a continuous space you must invent a way to compare measurements (like lengths, areas and volumes) from one place to another. This is called the metric. (Whose arms are larger?) And he said that you don’t need a metric if you use a discrete space; you just count the pieces of the space. 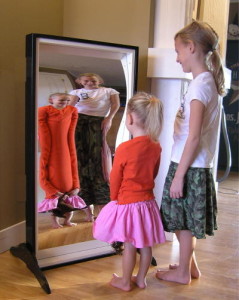 Part Two: Soon physicists start using Riemann’s math. Almost all assume space is continuous rather than discrete because this makes the math much easier. Albert Einstein sets out to build general relativity (GR) in a continuous 4-dimensional Riemannian space (let’s call it S4). Einstein says one must base physics on reality. But soon mental math is driving his physics. Here’s where things start to go off the rails. At first Einstein thinks 4-D spacetime is only a neat trick (it is) yet he buys into it. If you’ve read my post you know he changes his mind too late about space being continuous. Inexorably these miss-steps will lead physics to abandon its understanding of what time and space are.

Part Three: 1915 sees Einstein triumph after years of wrestling with that S4 math and gravity. He comes up with equations for GR. He gets them by insisting physics in a funhouse mirror is still physics. He calls this general covariance. GR says gravity is just the curvature of space. By insisting on allowing funhouse mirrors, that’s what Einstein finds we live in. As physicist John Wheeler summarizes: Matter tells space how to curve; space tells matter how to move. Sound circular? It is. Because GR assumes space is continuous, as Riemann warned it needs a metric. Choosing a metric involves assuming things GR itself can’t tell us. Another way to see this is: GR describes many kinds of universes, hopefully including this one. The metric is a guess based on what we see in this one, and on getting to equations that our math can solve.

Part Four: In the ’20s and ’30s four physicists and mathematicians independently choose a metric. It will become almost universal. That’s no pun; cosmology is based on FLRW and googling FLRW gets their names. Their metric is based on the largest scales that we can see—ten billion light-years away in space and ten billion years back in time.

Part Five: Many observations confirm calculations using GR and FLRW closely match observed reality. But their joint success mires physics in problems. First, are time and space relative or absolute? Relativity assumes that measurements in space and time are relative. That is, there is no absolute frame of reference that is unmoving; and there is no absolute time that is the same throughout space. But the FLRW metric assumes the universe has an unmoving frame of reference in space and an absolute time frame that is everywhere the same. How can GR and FLRW both be right? Second, are space and time distinct or do they merge as four dimensions? Relativity ties space and time together in a single 4-D bundle called spacetime with no way for time to be distinct from space. But the FLRW metric describes a 3-D universe; its time is distinct.

So GR and FLRW confront us with deep contradictions. Where can we go from here? I think we need to rethink what we mean by space and time for the whole universe. In Time One I explore Planck-scale flecks of discrete space and tocks of time. In The Singular Universe and the Reality of Time physicist Lee Smolin and philosopher Roberto Unger urge a rethinking too. Both books embrace the universe as a whole.

Where will rethinking take us? Into the best adventure of the human mind.